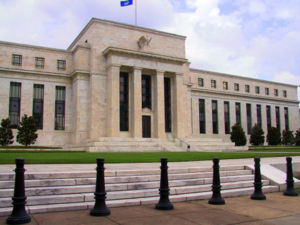 The Federal Reserve (also known as The Fed) is a central banking system that controls the monetary system of the United States, with virtually no accountability to the public. The Senate refuses to confirm for a position at the Fed anyone who is a critic or a genuine outsider. In practice, the Fed is a safety net for those connected with its club, as it arranged for the bailout of Long Term Capital Management in 1998[1] and then again for Wall Street banks a decade later.[2]

One of the main jobs of the Federal Reserve is supposed to be to control inflation by adjusting the supply of money in the economy, while at the same time maintain the stability of the financial system and promote economic growth. This should be done primarily by setting the interest rates (the "discount rate") for money it lends to banks,[4] and also by buying and selling government bonds in order to influence banks' cash supply (called "open market operations") and setting the amount of money that banks must keep in reserve ("reserve requirements").[5] These three major operations are the basis of monetary policy, and are performed by the Fed to target a specific Federal Funds Rate that it believes will be low enough to ensure available credit and stimulate the economy, but high enough to prevent inflation. The Fed also has the responsibility of supervising and regulating banking institutions.[6]

In 2008 the Fed became a major player in many new ways, taking over several major banks (ostensibly to prevent total economic collapse) and making trillions of dollars in guarantees. See Financial Crisis of 2008.

The discount or federal funds rate is the interest rate the federal reserve charges member banks for overnight lending. All federal and state chartered banks must meet their reserve requirement on a daily basis. At the end of a business day, some banks exceed their requirement while others fall short. So banks make overnight loans to each other ("interbank lending") at the federal funds rate, set by the Federal Reserve Board in its Open Market Meetings. However, job creation and economic growth will lead to a shortfall of money in circulation to meet new payrolls. As the amount of money in circulation to meet reserve requirements dries up, the Federal Reserve steps as the lender of last resort to supply new banking reserves to the network, i.e. expand the money supply. If the amount of reserves supplied to the network is excessive, the result is more money in circulation than necessary and inflation.

Open Market operations refer to the Federal reserve's buying and selling of U.S. Government Treasury securities (Treasury Notes and Bonds). By purchasing T-bills and bonds, the Fed purchases them with Federal Reserve Notes, or supplies more banking reserves to the network. By selling T-bills or bonds, the Fed drains excessive (or inflationary) banking reserves from the network. In this way the Fed attempts to control the money supply, the amount of money in circulation.

The Fed made the Great Depression much, much worse by utterly failing in its primary responsibility. It simply did nothing, as hundreds and thousands of banks failed (see bank run). What it was supposed to do was lend them enough money to keep going!

Friedman and Schwartz argued that all this was due to the Fed's failure to carry out its assigned role as the lender of last resort. Rather than providing liquidity through loans, the Fed just watched as banks dropped like flies, seemingly oblivious to the effect this would have on the money supply.[8]

Libertarians, such as Ron Paul, and many conservatives want to abolish the Federal Reserve. For 30 years Ron Paul has called for the secretive Federal Reserve bank to be audited.[9] Ron Paul's website declares "Since the Fed’s creation in 1913 the dollar has lost more than 96% of its value, and by recklessly inflating the money supply the Fed continues to distort interest rates and intentionally erodes the value of the dollar."[10]

However, conservatives are not united in their criticism: the prominent conservative commentator Vox Day, a member of Mensa, describes himself as a "loyal Federal Reserve supporter".[11]