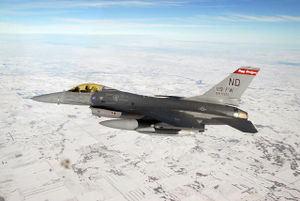 The F-16 Fighting Falcon is a multirole fighter aircraft. There are several versions serving in 24 air forces; with over 4000 of the aircraft produced, the F-16 is one of the most successful modern fighters. The Falcon has scored a number of times in combat, its most well-known mission being the Israeli bombing raid that destroyed the Iraqi nuclear power plant at Osirak in 1981.[1] The aircraft is known for excellent dogfighting maneuverability.

Nine Weapons stations on aircraft number 1 - 9 starting on the left wing tip. Four stations per wing with the center line station being numbered five. Stations 1 and 9 (wing tip stations) carry AIM-9 missiles on different variations. Stations 2,3 and 4 along with 6, 7 and 8 carry a mix of other armament or fuel tanks. Armament that can be carried includes: Aim-7 Sparrow; Aim 120C AMRAAM missiles; 250, 500, 1000 and 2000 lb GP bombs; 500 and 2000 lb Laser guided bombs.

Israel acquired F-16s for its air force in 1978, and their most well-known combat mission was the raid on the Iraqi Osirak nuclear reactor on June 7, 1981, carried out by eight Falcons flown by elite pilots. The target was destroyed without any hits on the bombers or their escorts, and it was one of the most successful bombing missions in aviation history. After the attack, Israel was thought to have used guided munitions because the strikes were so accurate. In fact, the strike had been carried out with unguided bombs. The skill of the pilots, and the sophistication of the F-16s’ targeting computers, was that good.

The very first time the F-16 saw combat, however, was earlier in that year. On April 28, 1981, F-16s downed two Syrian Mi-8 helicopters over Lebanon.[2] The first fighter kill was in July 14, 1981, when Amir Nachumi, one of the pilots in the Osirak attack, splashed a Syrian MiG-21. Nachumi would go on to score six more victories in the Falcon. In 1982, Israeli Falcons were involved in the aerial fighting with the Syrian air force over the Bekaa Valley, scoring a total of 44 aerial victories for no losses. The Syrians claim to have shot down a number of F-16s in the battle, but this has never been confirmed.[3]

F-16s have since formed the backbone of Israel's striking power. Falcons were active in the 2006 Israel-Lebanon conflict, and many of these were the new F-16I, a variant designed specifically for Israeli Defense Force needs. One F-16I was lost in an accident during the conflict.[4] On September 6, 2007, F-16Is also helped carry out Operation Orchard, an attack on a suspected Syrian nuclear plant.[5] F-16s hit several Hamas targets in Gaza in the last days of 2008 in response to rocket attacks on Israel from Gaza.[6]

Pakistan was an early customer for F-16s, which were soon involved in clashes with Soviet and Afghan aircraft during the Soviet occupation of Afghanistan. The Pakistani Air Force claims to have downed ten attack and transport aircraft over Pakistani territory between 1986 and 1989.[7] In May 1987, Afghan officials claimed that their jets shot down a Pakistani F-16 that had crossed into Afghan airspace,[8]

The F-16 was the most numerous airplane type in the Gulf War,[9] and flew the most combat sorties, almost 13,500.[10] F-16 units maintained a 95.2% mission capable rate during the war. Three were lost in combat, all to SAMs, all three of the pilots becoming POWs. Four other Falcons were lost in non-combat accidents or mishaps.[11]

USAF F-16s helped patrol the no-fly zones in Iraq after Desert Storm ended. They took part in attacks on SAM sites,[12][13] and scored two air-to-air kills, a MiG-25 and a MiG-23, both with AIM-120 AMRAAM missiles.[14][15] These were the first aerial victories for the Fighting Falcon in USAF service.

The nation of Venezuela had acquired F-16s for air defense starting in 1983 and, for a long time, was the only South American user. When a Venezuelan Air Force general attempted a coup in November 1992 (the second in Venezuela that year), two F-16 pilots stayed loyal to the government. They played a key role in quashing the rebellion, effectively countering the insurgents’ air power and shooting down three aircraft (two American-made OV-10 Broncos and an AT-27 armed trainer).[17] Venezuela is one of two nations that ordered their F-16's equipped with drag chutes in the tail cone above the engine afterburner can. The drag chute is used to slow the aircraft on landing and was needed for the high altitude runways in the country.

NATO F-16s helped enforce the no-fly zone over Bosnia (Operation Deny Flight) during the Yugoslav Civil War. On February 28, 1994, six Yugoslav Air Force light attack fighters violated the no-fly zone and were engaged by a pair of USAF Falcons. Captain Robert Wright downed three fighters with an AMRAAM and two Sidewinder missiles, and Captain Scott O’Grady fired a Sidewinder, but missed. The Falcons had to disengage due to low fuel, but a second pair arrived, and shot down a fourth plane with a Sidewinder. The remaining two YAF planes bugged out.[18][19]

On June 2, 1995, Captains Wright and O’Grady were airborne again, patrolling the no-fly zone near Banja Luka, when O’Grady's plane was locked on by an SA-6 missile and shot down. He safely ejected, and spent six days evading Serbian forces before he was rescued. His safe return made international headlines.[20]

On March 24, 1999, at the beginning of the Kosovo War (Operation Allied Force), a Dutch F-16 based in southern Italy shot down a Yugoslav MiG-29 with an AMRAAM missile, the first air-to-air victory of the operation, and the first for the Dutch military since World War II.[21] NATO Falcons executed a large portion of the airstrikes in the war, and on May 1, an American F-16 was shot down by an SA-3 missile while on a mission over Serbia.[22] The pilot was recovered safely. [1] A few days later, near Belgrade, another MiG-29 fell to a USAF F-16 of the 78th Fighter Squadron.[23]

American F-16s have taken part in operations in Afghanistan as part of Operation Enduring Freedom, as have F-16s from Denmark, Norway, and the Netherlands.[24]

In April 2002, in what has become known as the Tarnak Farm incident, a U.S. Air National Guard F-16 dropped a laser-guided bomb after the pilot saw what he believed to be anti-aircraft fire. The target turned out to be a Canadian infantry unit on an exercise. Four Canadian soldiers were killed and eight wounded. The pilot was later found guilty of dereliction of duty and reprimanded.[25]

F-16s were also involved in the 2003 Iraq War. One was lost to non-combat causes in June 2003.[26] Earlier that year, an F-16 was involved in another friendly fire incident with a Patriot missile battery.[27] There were no casualties, but the battery's radar dish was destroyed when the Falcon hit it with a HARM missile.

F-16s are still active in counter-insurgency missions, and a number of F-16 pilots have been awarded the Distinguished Flying Cross for missions over Iraq.[28] The most famous action of the war that involved the Fighting Falcon was the 2006 strike that assassinated Abu Musab Al-Zarqawi, then the leader of Al-Qaeda in Iraq.[29]

The Falcon played the title role in the movie Iron Eagle, and has been seen in the movies Blue Thunder, X2: X-Men United, The Sum of All Fears, and others. F-16s stood in for enemy MiGs in an episode of the short-lived ABC TV series, Supercarrier, and played a brief, but dramatic, role at the end of the CBS series, Jericho.

In literature,[30] the title character of the Wingman series of adventure novels is the pilot of the last F-16 to survive World War III. In Red Phoenix, Larry Bond's techno-thriller about a second Korean War, one of the main characters, Tony "Saint" Christopher, is an American Falcon pilot stationed in South Korea. Dale Brown put F-16s into a memorable dogfight with Cuban MiGs in his novel, Day of the Cheetah.