Evidential apologetics is an approach in Christian apologetics which emphasizes the use of evidence to demonstrate that God exists and that Christianity/Bible are supported with compelling evidence.

Within the discipline of Christian apologetics are various topics related to evidential apologetics:

Atheists and the improper weighing of evidence

Evidential apologetics and the rebuttal of non-Christian worldviews

Concerning atheism and mass murder, Christian apologist Gregory Koukl wrote that "the assertion is that religion has caused most of the killing and bloodshed in the world. There are people who make accusations and assertions that are empirically false. This is one of them."[1] Koukl details the number of people killed in various events involving theism and compares them to the much higher tens of millions of people killed under atheistic communist regimes, in which militant atheism served as the official doctrine of the state.[1] See also: Atheism and communism 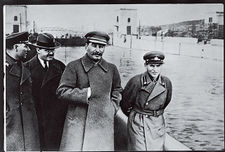 Nikolai Yezhov walking with Joseph Stalin in the top photo taken in the mid 1930s. Subsequent to his execution in 1940, Yezhov was edited out of the photo by Soviet Union censors.[2]

Theodore Beale wrote about secular leftists and leftists in general:

Evidential apologists also provide evidence/arguments showing the falsity/improbability of non-Christian worldviews. For example, Dr. Don Batten wrote an article on the origin of life which demonstrates the vexing problem first life is for those who insist that life arose through purely natural processes[4] See also: Philosophical naturalism

William Lane Craig on attempts to define the word atheism

See also: Atheist attempts to change the definition of atheism

Paul Edwards, who was a prominent atheist and editor of the Encyclopedia of Philosophy, defined an atheist as "a person who maintains that there is no God." [10]

Beginning in the latter portion of the 20th century and continuing beyond, many agnostics/atheists have argued that the definition of atheism should be defined as a mere lack of belief in God or gods.[8][9][10][11]

For more information, please see: Atheist attempts to change the definition of atheism