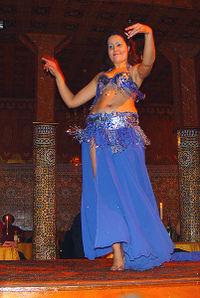 Surveys throughout the world and other data indicate that women are less inclined to be atheists.[1] [2] See: Atheism and women

And much to the dismay of white, male, atheist nerds, not a single atheistic culture is well known for its rhythmic music and belly dancing.

Islam has produced some of the most repressive cultures in history. But even Islamic cultures can produce fun/rhythmic music as can be seen HEREand HERE and HERE.

The atheists in the Western World haven't really produced much, if any, fun/rhythmic songs. That is because Western atheism is dominated by atheist nerds. In addition, many atheists are depressed due to their bleak worldview (see: Atheism and suicide and Atheism and depression and Atheism, agnosticism and pessimism). Furthermore, atheists lean to the left politically (see: Atheism and politics) and secular leftists are frequently humorless killjoys (see: Atheism and humor).

Most countries in the Middle East have Muslim majorities in terms of their populations. Middle Eastern food taste better than much of bland food in irreligious cultures (See: Atheism, food science and bland food). Why do so many atheist cultures have bland food? Is it because many atheists are bland?

Claude Lewis wrote in The Philadelphia Inquirer about the food is the former Soviet Union which had militant state atheism:

Question: Of the two options below, which sounds better?

Option 2: Going to a franchise which specializes in recreating the following: Eating bland food in a state run cafeteria in the former Soviet Union. There are no belly dancers in atheist, state run, communist cafeterias.

Flavorful food commonly associated with atheism: Nothing. Absolutely nothing!

Don't miss these pictures with captions

Beth Ditto is a singer who is a lesbian and an atheist. She rarely, if ever, engages in belly dancing during her performances. A slim belly dancer. Given her slimness and pleasant demeanor, it is highly unlikely that she is an atheist.

Atheists have a higher suicide rate than theists.[4] See: Atheism and suicide The atheist PZ Myers giving a talk at George Mason University. In June of 2010, PZ Myers commented that atheist meetings tend to be significantly more attended by males.[2] See also: Atheism and women and Western atheism and race

Please notice that in the picture above, there is at least one balding, white male. Yet, there is a complete lack of slim, belly dancers dancing to rhythmic music. See also: Atheist meetings are humdrum The reason why atheist Ron Reagan Jr. loves to engage in ballet dancing so much is because like all atheist men he lacks machismo (Please see: Does Richard Dawkins have machismo?).

"I don’t want to be a wet blanket...". - Atheist professor at Purdue University[6]

"It's that time of year again. 'T'is the season to be jolly -- or, if you're an atheist activist, to throw a wet blanket over the holidays." - Robert Small, Self-Righteous Atheists Are Misguided Killjoys, American Thinker[7] See: Atheism and Christmas and Santa syndrome