From Conservapedia
(Redirected from Border fence)
Jump to: navigation, search 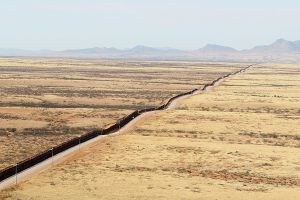 Border fence along the U.S.–Mexico border, specifically at the border of Arizona

A border wall or fence is a barrier constructed along an international border to prevent illegal immigration and protect a nation's security. Conservatives and nationalists generally support border walls, along with increased general border security, while liberals and globalists generally oppose border walls and support replacing them with open borders.

Growing number of border walls around the world

The number of border walls has been increasing around the world, and the number being built is accelerating.[1][2][3] By 2017, over 60 (and according to some sources, nearly or over 70) border walls existed around the world.[1][2][3][4][5][6] None of the barriers currently in operation existed before 1945, and their number slowly grew until the September 11, 2001 attacks, after which the rate of wall building greatly accelerated.[2][3][7] Countries build border walls to increase security, prevent violence, and stop illegal border crossings,[8] and they have been effective.[9][10][11][12]

The Great Wall of China is 5,500 miles (8,850 km) long.[13] The first parts of the wall were constructed in the 600s B.C., but Emperor Qin Shi Huang is remembered for his role in building and expanding the wall.[13] The wall was repaired and expanded through the Ming Dynasty in the late Middle Ages and Early Modern Period.[13] The purpose of the wall was to protect China from the Mongolians in the north.[13]

A limes, pronounced lee-mez, from which we get modern English limits, were barrier walls delineating the limits of the Roman Empire. On the outside of the limes were the barbarian hordes who wanted access to the more affluent civilization to either plunder its wealth or learn their technology, but refused to submit to Roman law or adopt Romanized customs.

The remains of Hadrian's Wall

Hadrian's Wall is in the north of England, running 73 miles (118 km) from coast-to-coast.[14] The wall was constructed after the Roman Emperor Hadrian visited Britannica in 122 A.D., and construction lasted six years.[14] Historians debate the exact purpose of the wall,[15] but it was probably intended to separate the Romans from the barbarians[15] and to defend Britain's northern border from the latter.[14] Historians debate the effectiveness of the wall,[15] but it is often viewed as being a tactical success and the most effective Roman barrier in Britain.[16]

Israel has built several effective border barriers along its borders,[12][17] and it has used those barriers to fight against illegal immigration.[18]

In January 2013, Israel completed most of its fence along its border with Egypt,[19] which it built due to massive levels of illegal immigration from Africa which caused a proportionate increase in crime.[20] The Israeli government reported later that year that illegal immigration into Israel had dropped by over 99.9%.[21][22] The Israeli government reported in September 2017 that zero people had entered the country illegally from Egypt in the past 12 months.[23] In May 2018, Israel began construction of an underwater border wall along its border with Gaza.[24] The media noted the effectiveness of the barrier.[25] In February 2019, Prime Minister Netanyahu announced that Israel had begun construction of a new barrier along the border with Gaza.[26]

In addition, Israel's fence along the West Bank has also been effective, greatly lowering suicide and other terrorist attacks.[27][28]

Israeli Prime Minister Benjamin Netanyahu has strongly supported his nation's border barriers.[29] The Trump Administration has viewed Israel's border barriers as a model for its own proposals,[30] and Hungary's conservative government has done the same.[31]

Hungary was overrun in 2015 by refugees passing through the country. In response, conservative Prime Minister Viktor Orbán took several actions,[32] including building a border barrier along the border with Serbia[33] and Croatia.[34] The fence was so effective that illegal immigration levels dropped to levels seen before the crisis began,[35] and by September 2017, illegal immigration levels had dropped by 99% since 2015.[36] In April 2017, the Hungarian government completed construction of a second border fence, one with high-tech features, on the Serbian border.[37] Unlike most other European countries, Hungary's leadership has taken a more conservative right-wing, common sense approach to the immigration crisis.[38]

As Orbán himself noted, Hungary's policies likely saved all of Europe from an even greater and more catastrophic migrant crisis.[39] Liberals and globalists, on the other hand, attacked Hungary for its actions.[40] Orbán won a supermajority in parliament in 2018 after making fighting mass migration his party's main campaign theme.[12]

As of 2017, about a third of the United States border with Mexico has a border barrier constructed along it.[2] About 80%[2] of that border wall was constructed due to the Secure Fence Act of 2006 (Pub.L. 109–367).[41] Illegal immigration levels decreased in the areas where the wall was built.[42] Among other examples,[43][44] in Yuma, Arizona, illegal immigration levels fell by 82% between 2007, when the fence was first built, and 2017.[45][46] Additionally, these border barriers are so effective that they have redirected the flow of illegal migration into very remote and dangerous areas where walls do not exist – illegal immigrants would rather risk their lives crossing there rather than even try to deal with border security.[47]

Donald Trump, who was elected U.S. President in 2016, promised to complete and build a wall along the United States–Mexico border in order to halt the flow of illegal immigration and slow the illegal import of drugs, firearms, and other materials. In 2016, the Republican Party Platform began calling for construction of the Border Wall. While liberals and establishment Republicans complain that building the wall will cost too much money, the Trump Administration's January 2018 proposal of spending $18 billion to construct a wall would comprise only 0.0338% of the federal budget.[48]

A 2018 report from the Center for Immigration Studies found that the cost of a border wall is less than the cost of illegal immigration.[49][50] It also would be less expensive than a DACA amnesty.[51]