Ben Bernanke (born 1953) is a Jewish-American Keynesian liberal economist who from 2006 to 2014 was Chairman of the Federal Reserve, one of the most powerful positions in the country. He was replace by Janet Yellen. A Republican, he was appointed by President George W. Bush to succeed Alan Greenspan. He has been nominated by President Obama for a second four-year term as chairman beginning in 2010. Bernanke took control in early 2006 when the economy seemed to be booming, but it was in the last stages of a housing bubble—and the bubble burst in 2007-8. He has been praised by liberals and moderates widely for his aggressive efforts to combat the Financial Crisis of 2008 and the resulting Recession of 2008. However, proponents of free market capitalism said Bernanke should not have bailed out failing firms and instead should have allowed free market capitalism to quickly recover as it did in the depression of 1920 without government intervention (free market capitalists assert that government intervention drags out economic recessions and depressions).[1][2] A 2005 study found that government corporate bailouts are often done for mere political considerations and the economic resources allocated exhibit significantly worse economic performance than resources allocated using purely business considerations.[3] In addition, he has also been blamed for regulatory failures that helped cause the crisis, and he helped engineer the wildly unpopular financial bailouts of giant banks and insurance companies. Wall Street reacted with near panic on rumors that he would not be reconfirmed in Jan. 2010, fearful that Obama might appoint someone much worse. In February 2010, concerning the Obama administration's monetary policy, the world renowned investor Jim Rogers said that the European Union, Chinese, and Australian central bankers are more competent and honest than the Federal Reserve and that Federal Reserve Chairman Ben Bernanke is "throwing gasoline on a fire" via his inflationary policies which are debasing the United States dollar.[4]

Bernanke played a major role, along with Treasury Secretary Henry Paulson in forging a vast, extremely expensive response to the Financial Crisis of 2008. The Fed and Treasury commitments exceeded $1 trillion in direct aid and over $6 trillion in loan guarantees as stock prices returned to 2003 levels.

In October Bernanke endorsed an eventual stimulus program that gave support to the proposed spending plans of Barack Obama.[5] In August 2009, economists on the Wall Street Journal panel are nearly unanimous that Bernanke should be reappointed to another term as chairman. However, a majority of these same economists failed to predict the 2008 recession. The economists of the conservative school of economics, called Austrian economics, did predict the recession of 2008.[6] Barack Obama, who has shown that he has little understanding of economics, has nominated Ben Bernanke to a second term as chairman of the United States Federal Reserve.[7]

On December 1, 2009, the Foreign Policy Magazine misguidedly named Ben Bernanke one of 2009’s “Greatest Thinkers". He was also the liberal Time magazine's "Person of the Year" for 2009.

Bernanke was born in Augusta, Georgia, later moving to Dillon, South Carolina. He excelled academically, becoming class valedictorian at Dillon High School. His academic record and near perfect SAT scores led to his admission to Harvard as a member of the Class of 1975. After receiving his undergraduate degree, Bernanke chose to continue studying economics at MIT under the supervision of Professor Stanley Fischer. His PhD thesis, "Long-term Commitments, Dynamic Optimization, and the Business Cycle",[8] was accepted in May 1979. He has taught at Stanford, New York University (NYU), and Princeton. Dr. Bernanke joined the Federal Reserve Board of Governors in 2002. Dr. Bernanke and his wife, Anna, have two children.[9]

Bernanke is a Republican and was appointed to the Federal Reserve Board, and elevated to Chairman, by Republican President, George W. Bush; he was confirmed by the Senate in 2006.

In January 2009, hearings are underway regarding a second four-year term. Some in Congress—on both the left and right—are taking out on him their anger at the financial crisis. John McCain will vote against confirmation saying, "I believe that he must be held accountable for many of the decisions that contributed to our financial meltdown." [10]

A video of Ben Bernanke's failed economic predictions can be found HERE.

In 2009, Bloomberg reported: "Federal Reserve Chairman Ben S. Bernanke lost money in the stock market last year as his holdings in annuities and other assets tumbled by as much as 29 percent, according to his annual financial disclosure forms." [11] 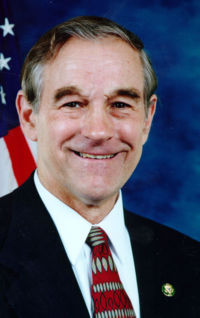 The charge that Bernanke's excessive money printing is inflationary is a valid charge which debases the United States dollar is often made by individuals who hold to a more conservative economics such as Ron Paul.[13]

Gold is often used as a hedge against inflation and economic collapse. In April 2011, the gold company Bullionvault reported about the falling value of the U.S. dollar:

An excellent video of Jim Rogers talking about the gross economic incompetence of Ben Bernanke can be found HERE.