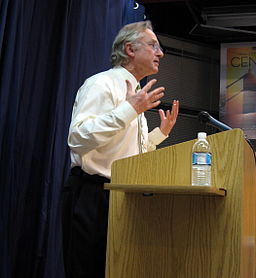 The Oxford University Professor Daniel Came wrote to the agnostic and evolutionist Richard Dawkins:: "The absence of a debate with the foremost apologist for Christian theism is a glaring omission on your CV and is of course apt to be interpreted as cowardice on your part."[1]

Some of the most prominent atheists/agnostics have flip-flopped between atheism and agnosticism/theism. Unlike Christianity, which is supported by a large body of sound evidence (see: Christian apologetics), atheism has no proof and evidence supporting its ideology.

On May 2011, the UK's The Daily Telegraph alluded to the cowardice of Richard Dawkins who flip-flops between being an agnostic and an atheist as far as his public persona (see: Richard Dawkins and agnosticism).[2][3]

Although Richard Dawkins declared himself an agnostic in the book The God Delusion, he declared that atheist evangelism is important.[4] Author Vox Day wrote concerning this matter, "While the fact that Dawkins declared himself a literal agnostic in the very book in which he declared the importance of atheist evangelism is both ironic and incoherent, it will surprise no one who has read the chapter of The Irrational Atheist entitled "Darwin's Judas".[5] Atheist philosopher Dr. Michael Ruse declared concerning Dawkins' book The God Delusion: "The God Delusion makes me embarrassed to be an atheist."[6] Also, despite being an elderly self-declared agnostic, in his book The God Delusion, Dawkins said that "permanent in agnosticism in principle" is "fence-sitting, intellectual cowardice".[7]

The Oxford University Professor Daniel Came wrote to the agnostic and evolutionist Richard Dawkins:: "The absence of a debate with the foremost apologist for Christian theism is a glaring omission on your CV and is of course apt to be interpreted as cowardice on your part."[8] See also: Atheism and cowardice

On atheism/agnosticism, Carl Sagan commented in 1981:

An atheist is someone who is certain that God does not exist, someone who has compelling evidence against the existence of God. I know of no such compelling evidence. Because God can be relegated to remote times and places and to ultimate causes, we would have to know a great deal more about the universe than we do now to be sure that no such God exists. To be certain of the existence of God and to be certain of the nonexistence of God seem to me to be the confident extremes in a subject so riddled with doubt and uncertainty as to inspire very little confidence indeed.[9]

Creation Ministries International's article on atheism points out an atheistic statement that Sagan made:

See also: Atheists doubting the validity of atheism and Denials that atheists exist

Darwin often had overwhelming thoughts the world was designed Francis Crick described himself as an agnostic with "a strong inclination towards atheism."[17]

Atheists and belief in purpose

On October 17, 2014, The New York Times published an article entitled Does everything happen for a reason? which declared:

“A slew of cognitive traits predisposes us to faith.” - Pascal Boyer, in the British science journal Nature [19]

“Atheism is psychologically impossible because of the way humans think. … They point to studies showing, for example, that even people who claim to be committed atheists tacitly hold religious beliefs, such as the existence of an immortal soul.” - Graham Lawton in the New Scientist science magazine[20]