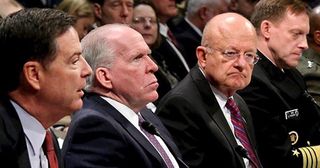 Prime movers in the Deep State coup. Comey (first left) funneled raw FISA data to FusionGPS to make it appear the FBI's illegal surveillance of the Trump campaign came from outside the government;[1] Brennan (second left) collected the bogus Clinton-Steele dossier from British intelligence sources as part of a supposed routine "intelligence sharing" agreement;[2] Clapper (third from left) rubber stamped the operation, lied to Trump about the scheme and facilitated leaks to the press to impugn Trump.[3] Adm. Rogers (end right), the lone hero of the group, detected the Obama FBI's abuse of the NSA's FISA computer system and personally reported the illegal activity to the FISA court.[4]

Congressional investigations by the 115th United States Congress into the Obama FBI, Democratic Party and Hillary Clinton campaign's interference and collusion with foreign actors in the 2016 presidential election were obstructed by the Mueller probe, which the FISA Court, the Inspector General, and the Department of Justice later found to be illegal.

Although the Democrats had earlier derided conservative Republicans as being the "party of No", the aftermath of the 2016 elections showed that the Democrats would rightfully assume that label.[5] They defined themselves in total opposition to all of President Trump's actions, even if his actions once aligned with their claimed beliefs.[6] Rep. Keith Ellison was the frontrunner for DNC Chair until Rep. Tom Perez exercised white privilege and usurped the job, relegating Ellison to the back of the bus. Ellison was later accused of several violent sexual assaults on women.[7]

Despite the criticisms by DNC chair Tom Perez and other Democrats of President Donald Trump for allegedly having a poor personality and using poor language, Perez has himself proudly used filthy language in political speeches, such as falsely claiming that Republicans "don't give a s***" about voters.[8] As a further sign regarding his party's hypocritical decline into using filthy language occurred when it, around the same time as Perez's comments, started selling shirts saying that "Democrats give a s*** about people."[9][10] This showed a blatant departure from Michelle Obama's "when they go low, we go high" phrase she and Democrats enjoyed using.[11] In addition to this, California Senator Kamala Harris[12] and New York Senator Kirsten Gillibrand[13] used the F-word at public events. These incidents were seen throughout the Democrat Party.[14] Some Democrats even used profane language, such as the f-word, against President Trump himself.[15] Even "conservative" Democrats such as West Virginia Senator Joe Manchin displayed liberal values through his vulgar language along with his beliefs.[16][17]

The Democrat Party shifted its policies further to the Left than ever before during the Trump Administration.[21][22] They became increasingly radical,[23][24][25] with the mainstream of the party including elected officials calling for abolishing ICE[26] and embracing full-fledged socialism.[27][28] In addition to their opposition to religious freedom and Second Amendment rights, Democrats and other leftists now began openly calling for reducing free speech.[29] Some publicly included illegal migrants as part of their voting base.[30] In August 2018, the DNC reversed a recent ban it had made on donations from big corporate fossil fuel companies since they were a large source of revenue for the party.[31] With good reason, the Republican Party began describing the Democrats as "an unhinged mob."[32]

Even though Democrats were extremely nasty and ruthless when promoting the Kavanaugh smear, they came to the conclusion that they were not "ruthless" enough when they lost.[33] In the midst of the chaos, lawlessness, and mob violence encouraged by party leaders, a staffer for Sen. Maggie Hassan was ultimately sentenced to four years in prison for posting the home addresses of Republican Senators online. Republican Senator Rand Paul was physically assaulted, and Republican Whip Rep. Steve Scalise had been shot and seriously injured earlier by a crazed social justice warrior on a suicide mission who was a backer of Democratic Socialist Bernie Sanders.

Opposition party during the Trump Administration

The Democrats won the popular vote for president in 2016 by 2.7 million votes.[34] Dr. Robert Epstein of the American Institute for Behavioral Research and Technology testified before Congress in 2019 that Google bias and meddling had shifted "between 2.6 million and up to 10.4 million votes" to Hillary Clinton.[35] While Clinton won the three most economically affluent states of New York, California, and Massachusetts by 7 million votes, she lost the other 47 states by a combined 4 million votes.[36] Republicans carried the Electoral College with 306 electors and maintained control of the House and Senate in the 115th Congress.

Typically the party's top fundraiser is elected party chairman. In 2017, Rep. Keith Ellison held the distinction. Symone Sanders, Bernie Sanders former press secretary said, "We don't need white people leading the Democratic party."[37] Ellison was endorsed by Senators Bernie Sanders,[38] Chuck Schumer,[39] Harry Reid[40] Elizabeth Warren, Martin Heinrich, Representatives John Lewis, Luis Gutierrez, Tulsi Gabbard, the AFL-CIO, among many others.[41] However, the prospect of an African-American Muslim leading the party frightened off the party's intolerant establishment, and Tom Perez was considered a suitable replacement.[42] A special position which had never existed before, Deputy Chair, and Ellison was relegated to the back of the bus.