From Conservapedia
(Redirected from William Donovan)
Jump to: navigation, search 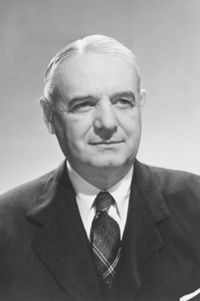 William J. Donovan (Buffalo, New York 1883 – Washington, D.C. 1959) was an American soldier, intelligence officer and lawyer, well known because of his wartime work as head of the Office of Strategic Services("father" of today's CIA).

President Franklin Roosevelt, during World War II, gave Donovan a number of increasingly important assignments, trusting him absolutely (They have formed a close relationship during their time at the law school together).

Lieutenant Colonel Donovan personally led the assaulting wave in an attack upon a very strongly organized position, and when our troops were suffering heavy casualties he encouraged all near him by his example, moving among his men in exposed positions, reorganizing decimated platoons, and accompanying them forward in attacks. When he was wounded in the leg by machine-gun bullets, he refused to be evacuated and continued with his unit until it withdrew to a less exposed position. [1]

He was also the first Chairman of the American Committee on United Europe a foundation which which encouraged European integration.