Whales are marine mammals of the order Cetacea, and a clear counterexample to the Theory of Evolution.

Whales are separated into the toothed whales, Odontocetes (which includes dolphins, porpoises, narwhals, beaked whales and sperm whales), and the whalebone, or baleen, whales, also called Mysticetes. The latter are mostly very large, which, instead of teeth, have baleen (whalebone) to filter small prey from the water; they are what people generally think of when the word whale is used. The whalebone whales include the rorquals - the blue whale, fin whale, sei whale, Bryde's whale, minke whale, and humpback whale; the grey whale; and the various right whales.

Although whales are famed for the massive size reached by some species, such as the blue whale (the largest animal to ever live), others are relatively small, like the pygmy right whale which grows to about 20 feet.[1] Though whales have many traits in common with fish (including fins and tails) they are classified as mammals under the Linnaean taxonomy classification system because they breathe air and lactate. Whales have a number of remarkable features including:

Mysticeti includes thirteen species in six genera, all chiefly characterized by the presence of plates of baleen hanging from their upper jaws inside their mouths. These plates are used to filter small animals such as krill, or small shoaling fish (herring or mackerel). To accommodate the baleen, as well as to catch enormous schools of krill and fish, these whales have huge mouths; the baleen in the bowhead (Balaena mysticetus) for example is up to ten feet in length.

Odontoceti comprises twenty-six species in ten genera, excluding the smaller dolphins and porpoises. All possess conical teeth in one form or another, with some bearing rudimentary teeth only. Only one species (sperm whale, Physeter macrocephalus) reaches lengths of over sixty feet; several beaked whales are rarely over thirty feet, while the remaining species reach lengths less than that.

The question of how whales and their relatives allegedly evolved from terrestrial mammals has intrigued evolutionary biologists since Charles Darwin's suggestion that they may have evolved from ancient mammals. He suggested that their development may have been started by something similar to a behavior observed in bears.

"In North America the black bear was seen . . . swimming for hours with widely open mouth, thus catching, like a whale, insects in the water. Even in so extreme a case as this, if the supply of insects were constant, and if better adapted competitors did not already exist in the country, I can see no difficulty in a race of bears being rendered, by natural selection, more and more aquatic in their structure and habits, with larger and larger mouths, till a creature was produced as monstrous as a whale."

Evolutionary biologists estimate the last ancestor of whales and hippos lived about 25 million years ago.[3], with a more recent suggestion that modern whales and their relatives arose from ancient artiodactyls (even-toed ungulates such as deer and hippopotami).[4] More specifically, they believe that whales evolved from Pakicetus through Aetiocetus, because of the similarities in their bone structure. For example, Pakicetus has nostrils at the front of its skull, Aetiocetus has nostrils in the middle of its skull, and the modern gray whale has nostrils at the top of its skull[5]. This kinship has been termed the whippo hypothesis.[6]

This theory of cetacean origins contrasts with the young earth creationist position that whales were created about 6000 years ago, before land animals[7][8][9]. The various theories regarding evolutionary origins, such as Darwin's "thought experiment"[10] about a bear-like ancestry, the modern "deer ancestry" theory, as well as the above Pakicetus to Aetiocetus to gray whale descent requires direct observation under the first step of the scientific method. To further compound the difficulties in the theory of evolution, it was recently discovered that rorqual whales possess a sensory organ at the front of their lower jaws, informing the brain of stresses and pressure of water when the mouth is open to collect food. This organ, according to the demands of evolution, would have to appear at the same time as the following:

Whales in their current form also appear suddenly in the fossil record, something that cannot be explained by current evolutionary science[12]. With that sudden appearance is also the trait that cannot be explained by anything other than a deliberate act of creation: baleen filter plates. Gray whales, right whales, and rorquals carry these filters; to do so according to evolution requires an intentional act, in this case a change in diet to smaller prey and the realization that it needs a filtering system to catch that prey[13]. As it remains, the descent of whales from terrestrial ancestors according to evolution cannot be proved. 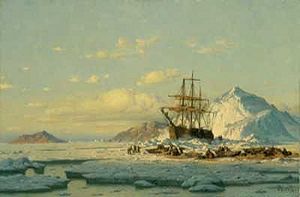 Now the LORD had prepared a great fish to swallow up Jonah. And Jonah was in the belly of the fish three days and three nights. Jonah 1:17 (KJV)

The great fish that swallowed Jonah is often thought of as being a whale, although the translation of 'great fish' is not a precise designation of species but may indicate any physically large, ocean-going creature. The physical difficulty of having a human be swallowed by a whale and survive the intense pressure of diving, lack of air and acidic environment of the stomach, and the fact that the Bible says that God "prepared" the fish has led some to suggest the creature may be uniquely and specially prepared by God for the purpose. Alternatively, Jonah may have been simply protected by supernatural means.

Whales are mentioned in three other places in the King James Version of the Bible:

Arguably the most famous book about whales is Herman Melville's Moby Dick, about a whaling-ship captain obsessed with hunting down the sperm whale (Moby Dick) which had bitten off one of his legs.