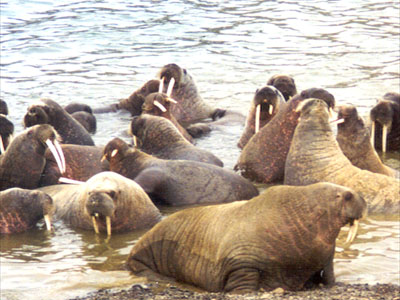 The Walrus Odobenus rosmarus is a large species of Arctic pinniped, readily distinguished from all other marine mammals by the possession of a pair of substantial tusks, used for hauling them onto ice floes. Walruses have no external ears, and are heavily whiskered, which aids them in detecting their main food, molluscs living on the sea floor. Sometimes rogue walruses, generally large adult males, will attack and consume smaller seals and toothed whales.

Three populations, sometimes considered as subspecies, are recognized; in the north Atlantic Ocean, the north Pacific Ocean, and the Laptev Sea.

Walruses have been traditionally hunted by Arctic people for their meat, hide and ivory for thousands of years. In recent times, hunting for ivory has severely impacted walrus populations. Although now protected, some poaching continues. The only other animal that preys upon adult walrus is the killer whale, though polar bears will sometimes attack calves.

Though generally confined to shallow coastal areas with ice floes, walruses occasionally wander further afield, with individuals recorded from as far south as Scotland and Ireland.

One of the protagonists of Lewis Carroll's poem, The walrus and the carpenter, is a walrus and is accurately depicted feeding upon molluscs.

It features in the song by The Beatles, I am the walrus.