Upton Beall Sinclair, Jr. (September 20, 1878 - November 25, 1968) was an American Socialist writer and politician, best known for The Jungle (1908), a "muckraking" book about the meat packing industry. While it is the book he is remembered for today, he wrote several others that were best-sellers of their time. In total he wrote over 90 books, most quite obscure today.

Sinclair was born in Baltimore, Maryland, on September 20, 1878, to Priscilla Harden and Upton Beall Sinclair. He was named after his father.[1]

One of his most successful books was Boston, a novel based upon the Sacco and Vanzetti case, in which he suggested that the convicted terrorists had been railroaded.[2] But in 2005, a 1929 letter from Sinclair surfaced, in which he confessed that Fred Moore, lawyer for the two men, “told me that the men were guilty, and he told me in every detail how he had framed a set of alibis for them."[3] As he revealed in another letter, from 1927, Sinclair feared for his life if he told the truth: "My wife is absolutely certain that if I tell what I believe, I will be called a traitor to the movement and may not live to finish the book."[4] In the end, he decided that a lie would sell better than the truth: "It is much better copy as a naive defense of Sacco and Vanzetti because this is what all my foreign readers expect, and they are 90% of my public."[5]

In the fall of 1902, Upton Sinclair was brought toward socialist viewpoints by Leonard D. Abbott.[6][7] Upon Abbott's insistence, Sinclair started reading socialist writings, and was most impressed with the work of George D. Herron.[8] Sinclair described his conversion to socialism this way:

It was like the falling down of prison walls about my mind; the most amazing discovery, after all these years . . . There were actually others who understood; who saw what had gradually become clear to me. The principal fact which the Socialists had to teach me was the fact that they themselves existed.[9] 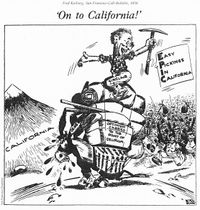 Socialist Upton Sinclair won the Democratic primary for governor in 1934, but voters saw through his fantasies and elected the conservative Republican Frank Merriam.

Upton Sinclair's political views were leftist and socialist. He ran for public office several times, running on the Socialist Party ticket in 1906 and 1920 for the U.S. Congress, and in 1922 for the United States Senate. In 1934, he ran on the Democratic Party ticket for governor of California. His 1934 run as a Democrat frightened a lot of people, who saw his EPIC (End Poverty In California) plan as an elaborate back-door scheme to bring communism to California, and he was overwhelmingly defeated.[10] Remarking on his electoral attempts in 1951, he said, "The American People will take Socialism, but they won't take the label. I certainly proved it...", adding that he had only won 60,000 votes running as a Socialist on an open platform of socialism, but 879,000 votes running as a Democrat on an "End Poverty In California" platform.

Upton Sinclair was a co-founder, along with fellow Socialist Party members Jack London and Norman Thomas, of the Intercollegiate Socialist Society in 1905. In 1921, the ISS changed its name to League for Industrial Democracy. In 1948 the LID formed a student wing called the Student League for Industrial Democracy which would in 1960 change its name to Students for a Democratic Society, thus becoming the genesis of the New Left campus unrest of the 1960s.