For the Irish rock band, see U2. 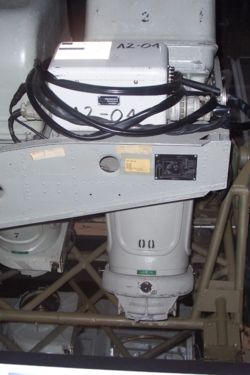 Part of the actual camera system used in the U-2.

The U-2 or Utility-2 is a spyplane operated by The United States Air Force. The U-2 is capable of flying at altitudes of 70,000 ft. for long periods of time, due to its lightweight nature.[1]

The U-2 was created in 1954 [2] in response to the growing threat of the Soviet Union's nuclear program during the Cold War, and the lack of other forms of intelligence at that time. The United States Air Force originally thought to just modify an existing aircraft for aerial photography, but this plan had many potential problems. Instead of just completing the original request for a modified aircraft, Lockheed-Martin designeer Clarance L. "Kelly" Johnson led a team to research a new aircraft design at the "Skunk Works" site.[1] Before being renamed to U-2, the project was referred to as the "Lockheed CL-282".[3]

The first U-2 flight was successfully flown by pilot Tony LeVier on August 4, 1955. The first operational U-2 mission over Poland and East Germany was flown by Carl Overstreet on June 20, 1956.[2]

The main purpose of the U-2 was to photograph strategic sites of foreign military, supplies, and research. Special cameras and film were developed for the U-2, and many new technological breakthroughs were made in order to create a fully functional system capable of photographing at high resolution from 70,000 feet.

Numerous reconnaissance missions were flown at later dates, with some venturing over the USSR.

In one mission over the USSR, flown by Francis Gary Powers, a Surface-To Air Missile was launched, disabling the aircraft. Powers escaped and was taken prisoner by the Soviet Union.[4] (For more information, see Francis Gary Powers)

On October 14, a U-2 photographed nuclear missiles being constructed by the Soviet Union, on the island of Cuba. As these missiles were not yet operational, it gave the United States the advantage of an early warning. U-2 flights continued to monitor the construction of the missiles. (For more information, see Cuban Missile Crisis)

The U-2 was a surprising technological breakthrough at that time. It's huge, glider like wings spanned 80 feet (Compared to a length of 49 feet) giving it glider like capabilities. Through this aspect of the design, it was able to travel up to 3,000 nautical miles without refueling. Its design also enabled it to reach altitudes above 70,000 feet, and reach speeds above 430 miles per hour.[5] These unique characteristics prevented standard aircraft from being able to hinder the U-2 flights. It was discovered though, that Soviet Surface-To-Air-Missiles were capable of disabling a U-2.