From Conservapedia
Jump to: navigation, search
Timothy Geithner (born 1961) became the Secretary of the Treasury in the Obama Administration in January, 2009.

Critics feared Geithner's vague plans would crash
Geithner got off to a very bad start, as his programs from 2008 have worked poorly, he was ridiculed and humiliated during his confirmation hearings for not paying taxes (even though he has admitted to using tax software Turbo Tax, which would have clearly showed him the errors). Unpopular, he resigned after Obama got a second term and was replaced by White House Chief of Staff Jack Lew.

Educated at Dartmouth and Johns Hopkins, he spent many years abroad. Previously he was president of the powerful Federal Reserve Bank of New York. Geithner started as a Republican and changed his voter registration — to Independent — only in the late 1990s, when he became under secretary for international affairs in the Clinton administration.

In 2008 he was deeply involved in the complex moves by the Federal Reserve and the Treasury to bailout banks in the Financial Crisis of 2008. That included $700 billion in money sought by president George W. Bush and passed by bipartisan majorities in Congress in October, 2008, and trillions in loan guarantees made by the Federal Reserve on its own authority. Geithner now is the person most responsible for bringing recovery to the economy.

Geithner was appointed to the Treasury largely on the basis of his work at the New York Fed. His most important action there was design the bailout of giant insurance firm AIG, with 80% government ownership of AIG. It received $170 billion from the government. AIG scandalized the nation in March 2009 by giving out $165 million in bonuses to the very people who caused it to lose over $60 billion after the government took it over.

In the confirmation hearings in January 2009 he was publicly humiliated by the Senate (controlled by Democrats) when it seemed he deliberately evaded over $40,000 of federal taxes. He paid the taxes and penalties and was confirmed, with most Republicans opposed. Geithner and the Obama Administration moved moved to handle the crisis on two fronts. Working with Democrats in Congress (and three moderate Republican Senators), they passed the an economic stimulus bill, the "American Recovery and Reinvestment Act of 2009", with $500 billion of new spending and nearly $300 billion in new tax cuts. The stimulus will begin operations in mid-February, 2009, and supporters hoped it would slow the nosediving economy. Conservative critics feared it would be ineffective in the short run and add to the national debt and tax burdens in the long run.

With banks on the verge of failure, Geithner unveiled yet another massive bailout program in mid-February. Trillions would be spent to move toxic assets out of the banks, but the unanimous reaction was negative and Geithner hung on to his job, but had to come up with a better plan. Geithner has the authority to decide what to do with the second tranche of $350 billion from the $700 billion banking bailout bill passed by Congress in October 2008. 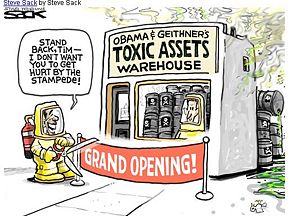 With Geithner losing more of his credibility as a problem solver, he came back with a plan on March 23 that will not need additional funding or approval by Congress. The Treasury will use $100 billion from the Troubled Asset Relief Program (TARP), as well as new capital from private investors, in order to generate $500 billion in purchasing power to buy toxic loans and assets. The program could potentially expand to $1 trillion over time, and initial responses by Wall Street have been favorable.