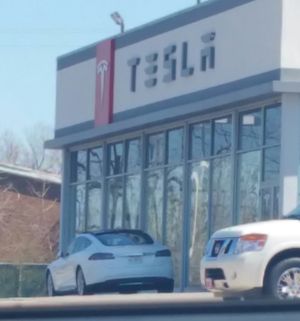 Tesla Motors is an American electric car company based in Palo Alto, California. The company was founded by Malcolm Smith and Marc Tarpenning in 2003. They were joined by PayPal co-founder Elon Musk, J. B. Straubel and Ian Wright the next year.[1] It designs, develops, and manufactures zero emission electric vehicles, such as the Roadster, the Model S, the Model X and the Model 3. As of April 2016, Tesla's market worth is about $32.75 billion, compared with GM’s $45.65 billion.[2] In August 2020, its market value was more than ten times higher, at $375 billion, due in large part to its exploitation of regulatory credits as required by liberal, zero-emission states and countries.[3] Some commentators have described Tesla's stock as grossly overvalued.

Tesla has recently received universal acclaim for the Model S, first released in 2012. The Model S is one of the safest cars NHTSA has tested, and is the highest scoring car Consumer Reports has reviewed in its 80 years of publication, with a road test score of a 99 out of 100.[5][6] Reasons for praise include a long driving range (for an electric vehicle), seven passenger seating, a luxurious and roomy interior, a huge, tablet like touchscreen interface on the dashboard, and operating costs half that of a Toyota Prius.

Toyota and Tesla have also worked together to produce the RAV4 EV (electric vehicle), which was based on the third-gen Toyota RAV4, but had a Tesla electric power train. It was primarily sold to the public in California with fleet sales in other states. [7] Sales discontinued in 2012.[8]