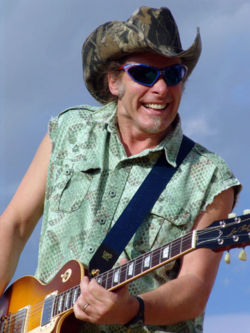 Theodore Anthony "Ted" Nugent (born December 13, 1948) is a pro-Second Amendment, conservative-leaning rock musician. He is originally from Detroit, Michigan, and has humorously called himself the "Motor City Madman." He has recorded 30 albums that have sold over 35 million copies worldwide. He has published several books, including a cookbook he co-authored with his wife, Shermane. Nugent is an avid hunter and fisherman who is often criticized by liberal animal rights protesters as well as environmentalists. He is a friend of George W. Bush.[1]

Nugent is on the Board of Directors of the National Rifle Association and is an avid promoter of gun ownership.[2] He supports the American military and the Republican Party. Nugent believes that homosexuality is morally wrong and has also spoken out against Barack Hussein Obama[3] as well as the use of recreational drugs, smoking, and drinking alcoholic beverages.[4] He opposes illegal aliens.