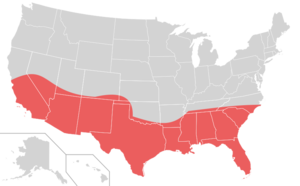 A rough map of the Sun Belt, even though other states, such as North Carolina and Virginia could also be considered part of the region.

The Sun Belt is a region in the Southern, Western, and Mountain states of the United States that experienced large economic and political growth and transformation starting around the 1960s. While the left-wing Northeast and Rust Belt, which was plagued with poor business conditions, went into a long period of decline, the conservative, small government Sun Belt prospered. The prosperity continues to this day.

The region has its name due to its warm climate and large economic and demographic growth.[1]

Prior to economic transformation

At the end of World War II, the area that would become the Sun Belt, particularly the South, was the poorest area of the nation.[2] The South and Southwest had a much smaller population, were relatively remote, and had an unideal meteorological climate for economic growth, as they were very hot locations.[1] On the other hand, the Northeastern and Midwestern United States were politically, economically, and demographically the most important areas of the nation.[1][2]

An important reason for the growth of the Sun Belt was the development of air conditioning.[1] With this innovation, one could live comfortably in the Sun Belt states all year long, as the climate was nice in the winter and air conditioning could be used in the summer.

Another reason for growth was the weak labor unions and small government in the region.[2] While the Northeast and Midwest were bogged down with big government, high wages and taxes and had strong labor unions which further increased costs and lowered efficiency, the Sun Belt had none of those things. Its strongly business-friendly climate encouraged businesses to relocate there.[1]

Some people have noted that there was much government spending directed toward the region, mainly for military-related installations and purposes but also for other projects.[2] Some have noted that much of this investment and spending occurred during World War II, even though real economic growth did not actually begin until a few decades later. Regardless, by 1980 almost half of U.S. soldiers were stationed in the area and 40 percent of the U.S. Department of Defense was directed to the area.[2]

Other stated factors in the growth of the Sun Belt include desegregation[2] and transportation and communications improvements.[3]

The period of growth and transformation in the Sun Belt began in the 1960s.[1] The fact that the Northeast and Midwest were not the economic and political centers of the nation was clear by the 1970s.[1]

Numerous businesses, both from other parts of the nation and around the world, relocated to the Sun Belt due to better business conditions and conservative, pro-business policies.[1] Due to an increased emphasis energy Independence beginning in the 1970s, several Sun Belt states, such as Texas with its massive oil reserves, experienced large growth and development.[1]

The above-average growth of the conservative Sun Belt and the decline of left-wing states has continued into the early 21st Century.[4][5]

Meanwhile, the Northeast and Midwest, with its left-wing governance and many regulations, lost businesses and people and went into a period of decline.[1]

In addition to economic growth, the conservative Sun Belt dramatically increased its influence politically.[1][2] As the Sun Belt states saw greatly increasing populations, their representation in Congress also grew as more and more U.S. House seats were allotted to them.[1] This growth played an important role in the 1994 Republican Revolution, where the GOP obtained congressional majorities in the first time in 40 years.[1]

On the other hand, the left-leaning North and Midwest, which had formerly been the most influential region in U.S. politics, lost representation in Congress and lost much of its former political influence.[1][2]

The Sun Belt also became very culturally influential.[1] Not only did massive population growth and migration occur due to economic- business-related reasons, but also because of retirees and other people attracted to the friendly climate of the region.[1] Not only were economic and political living conditions more favorable compared to the rest of the nation, but the natural beauty, the development of air conditioning, and the warm winter climate also encouraged migration.[1]

In addition, the culture of the region, particularly the South, became more influential and mainstream throughout the entire nation.[1] Not only did the region become very influential in American politics, but Southern and Western culture, such as in music, became popular throughout the nation.[1] In addition, Hispanic culture, also from Sun Belt states due to immigration, much of it illegal, became more prominent.[1]

In many cases, as many migrants moved to Southern states such as Texas, Georgia, Florida, North Carolina, and Virginia, they also began to lose some of their Southern identity and become more "mainstream." In some cases, such as Virginia, the migration also caused them to become politically liberal.