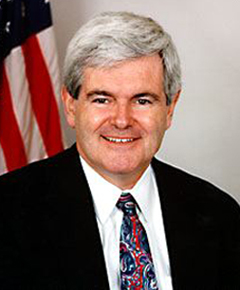 Newt Gingrich, the most important figure behind the 1994 Republican Revolution

The Republican Revolution of 1994 refers to the massive gains the Republican Party experienced in the 1994 midterm elections. The party took the U.S. House of Representatives and Senate for the first time in 40 years. It is also referred to by some as the Gingrich Revolution.[1][2][3][4]

U.S. Representative Newt Gingrich, who was rising in the Republican Party, played a leading role in drafting the Contract with America, a 10-point list of conservative policies that the GOP promised to pass if elected into power.[6][7]

34 Democrat incumbents were defeated in the election, including House Speaker Tom Foley.[8] Not a single Republican incumbent,[8] either in the House, Senate, or state governorships, was defeated.[9]

After the election, Gingrich became Speaker of the House.[7][8] In the first 100 days of the 104th Congress, House Republicans passed every bill promised in the Contract with America, with the exception of a constitutional amendment instituting term limits on Congress.[7][8]

During the 104th Congress in 1995 and 1996, several conservative Democrat Representatives switched party affiliations to the Republicans, who represented their views dramatically more.

President Clinton recognized the ramifications of the major GOP victory by stating in his 1996 State of the Union Address that "the era of big government is over."[11] However, this statement turned out to be false, as could be seen in the later years of Clinton's presidency as well as the succeeding presidents,[12] including Barack Obama.

The 1994 Republican Revolution exposes the left-wing policies of Bill Clinton. While some people view Clinton as a moderate, the actions he took as president clearly show otherwise. He supported the leftist Democrat agenda prior to the midterm elections. Even after Republicans took the House and Senate, he strongly opposed most GOP legislation, and only signed welfare reform after two vetoes.[6] In fact, Clinton is likely only remembered as a moderate because of the fact that he had to deal with Republican congressional majorities for six years, something which prevented his left-wing agenda from being enacted.

The 2010 Midterm Election was very similar to the 1994 Republican Revolution. The American people were fed up with leftist, big government Democrat policies and voted for the GOP in a landslide. In that election, the GOP won even more house seats—63—than in 1994, gained some Senate seats (but not enough for form a majority), and made massive gains in governorships and state legislatures.

The Republican Party won record gains in the 2014 elections, gaining a greater number of Senate seats than it had in 1994 and winning a record amount of seats in the House, and 2016 elections, where the GOP gained a national trifecta and won the presidency under Donald Trump.