Samuel Gompers (January 27, 1850 – December 13, 1924) was the most prominent American labor union leader in the early 20th century. Gompers founded the American Federation of Labor (AFL) and held the position as president of the organization for all but one year from 1886 until his death in 1924. He promoted harmony among the different craft unions that comprised the AFL. Focused on higher wages and job security, he fought against socialism and the Socialist party. After 1907 he formed alliances with the Democratic Party at the local, state and national levels. He enthusiastically supported the war effort in World War I, and saw rapid growth in union membership and wage rates. He is an icon of the mainstream labor movement, and of liberalism, but is hated by the left because of his support for capitalism.

Gompers was born in London, England into a working class Jewish family which had recently arrived from Holland. He left school at age ten to apprentice first as a shoemaker then as a cigar maker. The family immigrated to New York City in 1863, settling on the Lower East Side of the city. He married Sophia Julian in 1867[1] and became a naturalized citizen in 1872. Gompers did not have a formal education, but said, "The factory was my Harvard and my Yale."

In 1877 the union had collapsed and Gompers and his friend Adolph Strasser using local 144 as a base rebuilt the Cigar Makers' Union, introduced a hierarchical structure, and implemented programs for strike fund and pension fund, which were paid for by charging high membership dues. He told the workers they needed to organize because wage reductions were almost a daily occurrence. The capitalists were only interested in profits, "and the time has come when we must assert our rights as workingmen. Every one present has the sad experience, that we are powerless in an isolated condition, while the capitalists are united; therefore it is the duty of every Cigar Maker to join the organization. . . . One of the main objects of the organization," he concluded, "is the elevation of the lowest paid worker to the standard of the highest, and in time we may secure for every person in the trade an existence worthy of human beings." [2]

His philosophy of labor unions centered on economic ends for workers, such as higher wages, benefits, and job security. His goal was to achieve these without political action or affiliation by the union, but rather through the use of strikes, boycotts, etc.

Gompers viewed unions as the labor component of a business, neither superior nor inferior to the management component, but just as essential. Europeans unions were much more confrontational, but Gompers sought a business relationship that would be profitable to both sides. His belief led to the development of procedures for collective bargaining and contracts between labor and management which are still in use today. In practice, AFL unions were important in industrial cities, where they formed a central labor office to coordinate the actions of different AFL unions. Issues of wages and hours were common causes for short strikes. Many strikes were assertions of jurisdiction, so that the plumbers, for example, used strikes to ensure that all major construction projects in the city used union plumbers. In this goal they were ideally supported by all the other construction unions in the AFL fold. Safety issues were at issue in fewer than 5% of strikes; more common was a strike to keep a black man or a non-union man from holding a job the unions wanted to control. The AFL itself never called strikes—the member unions did that—but Gompers coordinated inter-union cooperation to help strikers.

Gompers helped found the Federation of Organized Trades and Labor Unions in 1881 as a coalition of like-minded unions. In 1886 it was reorganized into the American Federation of Labor, with Gompers as its president. He was reelected annually, except for 1895, when the socialists defeated him.

Under Gompers's tutelage, the AFL coalition gradually gained strength, undermining the old Knights of Labor, which as a result had almost vanished by 1900. He was nearly jailed in 1911 for publishing, with John Mitchell, a boycott list, but the Supreme Court overturned the sentence in Gompers v. Buck's Stove and Range Co..

Gompers's strong opposition to socialism and radicalism in the AFL, combined with the AFL's base among skilled workers, led to the formation of the far-left Industrial Workers of the World organization in 1905. The IWW tried with limited success to organize unskilled workers; Gompers fought it every step of the way and saw it collapse during World War I when IWW radicals tried to sabotage the American war effort and were stopped by the Wilson administration.

Gompers, an immigrant himself, like most labor leaders, opposed unrestricted immigration from Europe because it lowered wages. He opposed any immigration at all from Asia for the previous reason and also because it brought an alien culture. He and the AFL strongly supported the Chinese Exclusion Act of 1882 that kept out the Chinese.[3] The AFL was instrumental in passing immigration restriction laws from the 1890s to the 1920s, such as the 1921 Emergency Quota Act and the Immigration Act of 1924, and seeing that they were strictly enforced. As Mink shows, the link between the AFL and the Democratic Party rested in large part on immigration issues; the owners of large corporations wanted more immigration and thus supported the Republican Party.[4]

Early on, Gompers was a supporter of the Single Tax and Henry George.[5] When the New York Weekly published Progress and Poverty serially, he recalled how members of his union read aloud chapters of the book and discussed the major parts. He also helped George gain the nomination for Mayor of New York City.[6]

During World War I Gompers was a strong supporter of the war effort. He was appointed by President Wilson to the powerful Council of National Defense, where he instituted the War Committee on Labor. He was an attendee at the Paris Peace Conference in 1919 as a labor advisor 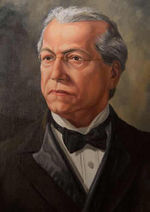 Gompers died in San Antonio, Texas, aged 74, and was widely mourned by labor and political allies. His AFL saw the CIO unions split off in the 1930s and rejoin, forming the AFL-CIO that is still powerful in the 21st century. Conservatives have hailed him as a tough bargainer who supported capitalism, helped build a blue collar middle class, and opposed socialism in and outside American unions.[7]

The United States Navy destroyer tender USS Samuel Gompers was named in his honor, and in 1989 the Department of Labor named Gompers in its Hall of Honor. An impressive monument[8] honoring Gompers resides in Gompers Square on Massachusetts Avenue in Washington, D.C.