From Conservapedia
(Redirected from Restoring Honor 8-28)
Jump to: navigation, search According to Glenn Beck's website, Restoring Honor was a "non-political event" conceived to pay tribute to the United States "heroes, our heritage and our future," and to "pledge to restore honor" in America at the steps of the memorial.[1] The Restoring Honor Rally was also a fundraiser for the Special Operations Warrior Foundation, a charity that provides funds for the surviving children of Special Ops personnel killed in battle.[2][3] The event prepared for up to 300,000 people,[4] and with the help of supporters was able to raise more than five million dollars for the Special Operations Warrior Foundation.[5]

KCCI8 News reported concerning the Restoring Honor Rally, "A scientific estimate placed the crowd size around 87,000, while media reports varied dramatically from tens of thousands to 500,000."[6]

Sarah Palin was a keynote speaker, as was Alveda King, Dr. Martin Luther King Jr.'s niece, who has said that her uncle would have attended the rally if he were alive today.[7][8] Other attendees include Glenn Beck himself and executives from the Special Operations Warrior Foundation.

As part of the Restoring Honor Rally, Glenn Beck previewed a portion of what he described as the "100 Year Plan for America," to restore honor.[9] He said:

Glenn Beck has stated that education is key to restoring honor, and not just for our children, but for all America as a whole. He further detailed what it means to "restore honor," and said that despite America's great diversity, "nothing unifies Americans more than their support for public acknowledgments of God." Beck said to consider the following aspects of American heritage that he honors and respects:[11] 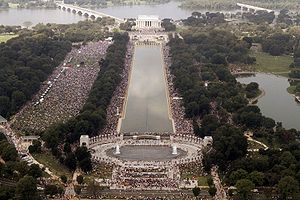 According to Glenn Beck's Web site, the following text is a verbatim description of the Restoring Honor Rally:[12]

Throughout history America has seen many great leaders and noteworthy citizens change her course. It is through their personal virtues and by their example that we are able to live as a free people. On August 28, come celebrate America by honoring our heroes, our heritage and our future.

Join the Special Operations Warrior Foundation, Glenn Beck, Sarah Palin and many more for this non-political event that pays tribute to America’s service personnel and other upstanding citizens who embody our nation’s founding principles of integrity, truth and honor.

Our freedom is possible only if we remain virtuous. Help us restore the values that founded this great nation. On August, 28th, come join us in our pledge to restore honor at the steps of the Lincoln Memorial in Washington DC.

Among the individuals upset over Restoring Honor in America, Reverend Al Sharpton accused Glenn Beck of trying to "hijack" the Civil Rights Movement by hosting the "Restoring Honor" rally at the Lincoln Memorial.[13] The Washington Post reported that Al Sharpton planned to host a rally to commemorate King's speech.[14] Reverend Al Sharpton's planned rally to commemorate Martin Luther King Jr.'s speech will coincide with the Restoring Honor Rally.[15] Sharpton said he began planning his event in April, but that it is "not a countermarch to Beck." However, on the other hand, Social Justice extremists have expressed outrage against Glenn Beck's Restoring Honor Rally.

Good Morning America's Claire Shipman launched a pre-emptive one-sided attack on the event, including selectively editing clips from the conservative host. The ABC journalist featured a snippet of Beck asserting, "Blacks don't own Martin Luther King."[16] ABC's story was out of context so bad that it made Glenn Beck appear like a racist hate monger. Claire Shipman's deceitful, propaganda-ish style reporting on ABC News went so far as to assert that there are angry voices "comparing the Tea Party to the KKK," despite the fact that these are two different events in American history, each with completely opposite agendas - both politically and in merit.[17] Glenn Beck exposed ABC News for their deceitful practices.[18]

Some evangelicals questioned the propriety of evangelical participation in the rally with Beck, a Mormon.[21]