The Reagan Era or Age of Reagan is the name historians apply to the last 30 years. Scholars left and right are reaching a consensus on the issue, with conservatives pleased and liberals grudgingly conceding.

Five factors were at work. First the failure of liberalism in the 1970s stunned and silenced liberals, who were already under heavy pressure from the far left. Second, that failure energized a new conservative coalition involving the Religious Right, the business community, and Americans alarmed by the decline in America's global position. Third, Reagan appeared at the right time with the right skills to mobilize conservatives, and lead the nation—and Congress—to support for his wide-ranging policies. Fourth, the policies worked, as the nation's great enemy the Soviet Union collapsed and vanished, and the economy at home surged forward. And finally the policies reflected the new national mode and thus became a permanent fixture that was largely accepted by moderate Democrats, especially President Bill Clinton in the 1990s. 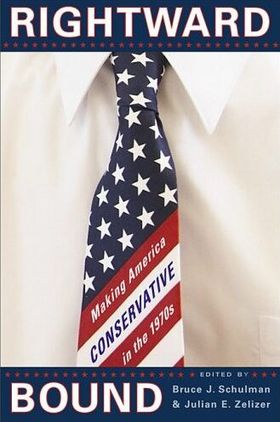 The Age of Reagan replaced the age of FDR. The liberal regime created by Roosevelt during the New Deal and sustained by Democrats with some help from liberal Republicans featured the welfare state and tight federal regulations of key sectors of the economy. The process of deregulation began in the mid 1970s, after the resignation of Richard Nixon, a Republican who was liberal on many New Deal issues. In the 1970s the Keynesian consensus among economists collapsed with when it could neither explain nor provide a remedy for stagflation (simultaneous high unemployment and high inflation). It was largely replaced by a conservative viewpoint heralded by Milton Friedman and the Chicago School of Economics, which attacked Keynesianism in macroeconomic policy, and attacked regulation as well. The nation's move to the right in economics was also aided by the ineptitude of President Carter, which contributed to the public's collapsing confidence in the government's ability to deal with the nation's problems. Carter's failures fulfilled the conditions that allowed Reagan, as the leader of the conservative movement, to enter from stage right.

Social issues and the Religious Right

By 2009 there was a growing consensus among scholars such that both conservative admirers and liberal critics agree that he has been the most influential president since the death of Franklin D. Roosevelt in 1945, leaving his imprint on American politics, diplomacy, culture, and economics. for example "As of this writing, among academic historians, the Reagan revisionists—who view the 1980s as an era of mixed blessings at worst, and of great forward strides in some renditions—hold the field," reports one liberal historian.[1]