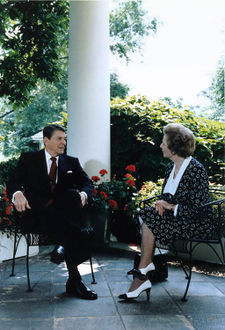 Ronald Reagan and Margaret Thatcher at the White House

The Reagan Doctrine was an aggressive foreign policy in 1981-87 in the first term of President Ronald Reagan. Designed to roll back Communism in its weakest points and built on the concept of Peace through strength, and weaken the Soviet Union by targeting the overthrow of its marginal allies in the Third World. Conservatives argue that it was a smashing success and dramatically undermined the power of the Soviet Union, forcing it to retreat, reform and collapse its empire by 1989.

Reagan's foreign policy could be summed up by his view of the Soviet Union as the "Evil Empire"—that is an illegitimate state. He rejected the détente policy that Richard Nixon, Gerald Ford and Jimmy Carter had pursued until 1979, when the Soviet invasion of Afghanistan proved its failure. Reagan long had opposed the containment strategy, which opposed additional expansion and led to wars of the enemy's choosing in Korea (1950-53) and Vietnam, 1965-73. Reagan instead proposed Rollback, a strategy to steadily reduce and eventually eliminate the Communist threat.

The policy was most fully implemented in Afghanistan, the critical arena for rolling back Soviet power, and in Central America, where Cuba acted as a Soviet proxy . Reagan's Afghanistan policy had very wide support inside the U.S. and among allies. Not so in Central America, where critics, especially Democrats in Congress, repeatedly warned it would lead to nuclear war and sought to block its implementation. Reagan supporters responded that the Soviets would not risk total destruction Russia—and its Communist system—merely to protect flimsy satellite states distant from Moscow. Reagan mustered his political strength in a see-saw battle with Congress, and generally won out even though he was weakened by the "Iran Contra" scandal. When Soviet leader Mikhael Gorbachev withdrew support for Soviet satellite governments in 1989, the entire Communist empire collapsed rapidly, with Cuba the only survivor.

In 1981 the newly elected Reagan rejected Henry Kissinger and other advocates of détente and brought in hard-liners, many of them previously associated with Democratic Senator Henry Jackson. The Reagan Doctrine in fact operated as early as 1981, without a name, but Reagan never planned to announce this doctrine publicly. Two months after Reagan declared in his 1985 State of the Union address that the United States should not "break faith" with anti-Communist resistance groups, Charles Krauthammer, a conservative political commentator first dubbed this declaration the "Reagan Doctrine". Krathammer explained that the Reagan Doctrine proclaims overt but unashamed American support for anti-Communist revolution on the grounds of justice, necessity and democratic tradition. Justice, said Reagan on Feb. 16 1985, because these revolutionaries are "fighting for an end to tyranny." Necessity, said Secretary of State George Shultz, because if these "freedom fighters" are defeated, their countries will be irrevocably lost behind an Iron Curtain of Soviet domination.[1] Reagan stressed the nation's traditional support for democracy worldwide, because to support "our brothers" in revolution is to continue--"in Afghanistan, in Ethiopia, Cambodia, Angola . . . and Nicaragua"—200 years of American support for "Simon Bolivar . . . the Polish patriots, the French Resistance and others seeking freedom."[2]

The Reagan administration's policies toward anti-Communist resistance groups varied far more than the term "Reagan Doctrine" suggested. There were differences in local conditions and US security interests as well as sharp disputes between administration policymakers produced divergent policies toward "freedom fighters" in Afghanistan, Nicaragua, Mozambique, Angola, and Cambodia during Reagan's presidency. The Mujahideen who fought against the Soviets in Afghanistan received substantial U.S. military aid, including sophisticated weapons, but the anti-Communist resistance in Cambodia got only small amounts of nonlethal supplies. The guerrillas fighting a Marxist regime in Angola eventually received U.S. help, but a similar movement in Mozambique that opposed a leftist government received no assistance from the Reagan administration.[3]

The Reagan Doctrine was buttressed by a massive buildup of American forces across the board, and a program of modernization and revitalization for the armed forces began in earnest. The Defense budget nearly doubled, from $136 billion in 1980 to $244 billion in 1985.

At the same time the Strategic Defense Initiative was begun, which promised to build an anti-missile shield that would largely neutralize the huge Soviet arsenal of intercontinental missiles. Moscow was forced to focus on SDI and ignore its peripheral empire. The scope of SDI would cost hundreds of billions—even trillions of dollars—that the overstretched Soviet budget could not match, and its incompetent computer system could not match.

The Reagan Policy operated most effectively in Afghanistan and Central America. Radical leftists regimes, supported by Cuba and the Soviets, emerged in Nicaragua and Grenada, and threatened to overthrow pro-American governments through insurrection in El Salvador and Guatemala.

Reagan reversed Carters policy of hand-wringing and rhetoric and poured in cash subsidies and direct military aid to support the front line nations. Liberals in the U.S. said these anti-Communist regimes were morally unworthy of American aid, and fought bitterly and intensely in Congress to block it.

In 1981 Robert McFarlane, then assistant to the Secretary of State proposed a coordinated covert political, economic, and military approach to the pro-Communist Sandinista government in Nicaragua and the insurgency in El Salvador. His proposal was approved in January, 1982, in "National Security Directive 17," which provided for a $20 million program against the Sandinista government and gave the Central Intelligence Agency (CIA) responsibility for organizing a five-hundred-man "interdiction" force.[4] Democrats in Congress began voicing opposition in 1982; Reagan and Congress were in constant battle until 1987, when all five Central American heads of state signed a peace accord. Scholars debate whether it was the military role of the contras that brought about the negotiations, or the economic restrictions on Nicaragua, or the pressure from other nations. The Sandinistas and Contras signed a cease-fire agreement in 1988, and in 1991 democratic elections overthrew the Sandinista regime.[5]

A 1983 far-left coup destabilized Granada, and its neighbors called for American help. Reagan acted in a matter of hours, overthrowing the Communists, defeating the Cubans, rescuing a thousand Americans, and allowing Grenada to achieve freedom from tyranny. The world was stunned: roll back was for real, not mere rhetoric. Nicaragua and Cuba the pro-Soviet regimes left in the region.

The Reagan Doctrine called for aid to the anti-Communist forces in Angola that were battling Cuban invaders. American and South African diplomatic and military backing for the guerrillas was the main factor behind Moscow's policy reversal in Angola.[6]