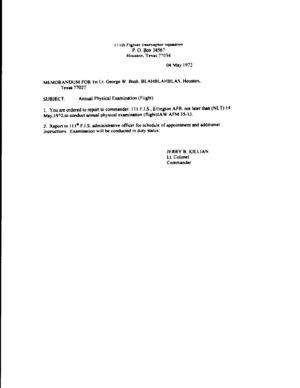 One of the forged "Killian Documents" used by CBS News, detailing an order by then-Lt. George W. Bush to report for a physical

"Rathergate" is the derisive term applied to a set of four documents allegedly written by the former commanding officer of President George W. Bush in the early 1970s, and broadcast on the CBS program 60 Minutes Wednesday, September 8, 2004. The resultant exposure of these documents as forgeries, coupled with a lack of proper news investigating techniques, led to the ouster of four senior producers at CBS several months later, as well as the departure of long-time anchorman Dan Rather, for whom the scandal was named. Because of this, the event was also infamous for coining the phrase "fake but accurate", referring to Fake news.

In September, 2004, the presidential campaign between George W. Bush and John Kerry was in its final months. Part of American politics was to issue what is called an "October surprise", in effect a last-minute effort by the opposition aimed at discrediting the leading candidate to the point that he loses the election. On September 8, 2004, CBS News broadcast 60 Minutes Wednesday, with a lead-in segment by Dan Rather on newly disclosed documents which indicated Bush may have shirked his duties while in service with the Texas Air National Guard:

"The military records of the two men running for president have become part of the political arsenal in this campaign – a tool for building up, or blowing up, each candidate’s credibility as America's next commander-in-chief."

"While Sen. Kerry has been targeted for what he did in Vietnam, President Bush has been criticized for avoiding Vietnam by landing a spot in the Texas Air National Guard - and then failing to meet some of his obligations."

"Did then-Lt. Bush fulfill all of his military obligations? And just how did he land that spot in the National Guard in the first place? Correspondent Dan Rather has new information on the president’s military service – and the first-ever interview with the man who says he pulled strings to get young George W. Bush into the Texas Air National Guard." [1]

The intent of the broadcast was to prevent Bush's reelection by insinuating that he had used his political connections to avoid service in Vietnam. A highlight of the segment was an interview with former Texas House Speaker and Lt. Gov. Ben Barnes, who stated "I was contacted by people from the very beginning of his political career, when he ran for governor, and then when he ran for president, and now he's running for re-election." Barnes, a lifelong Democrat, at the time was a protégé of President Lyndon B. Johnson, and in 2004 was actively working on raising money for Kerry's campaign; he stated that he had wielded the clout to help Bush get into the Texas ANG.[2]

The documents are in the form of memos supposedly written by Lieutenant Colonel Jerry B. Killian, which include:

The documents were supplied to CBS news by a former officer in the Texas Air National Guard, Bill Burkett, who stated in interviews earlier in the year that "he overheard a telephone conversation in the spring of 1997 in which top Bush aides asked the head of the Texas National Guard to sanitize Bush's files as he was running for a second term as governor of Texas. Several days later, he said, he saw dozens of pages from Bush's military file dumped in a trash can at Camp Mabry, the Guard's headquarters".[7]

The script used in the document was instantly suspected and first realized to be a forgery by a Freeper with the username of "Buckhead".[8][9] Bloggers also picked it up that the font was "Times New Roman", and matched the documents up with the default layout of Microsoft Word. As to it being a part of the U.S. military, journalist Robert Bluey wrote "The typography experts couldn't pinpoint the exact font used in the documents. They also couldn't definitively conclude that the documents were either forged using a current computer program or were the work of a high-end typewriter or word processor in the early 1970s. But the use of the superscript "th" in one document - "111th F.I.S" - gave each expert pause. They said that is an automatic feature found in current versions of Microsoft Word, and it's not something that was even possible more than 30 years ago.".[10]

The standard-issue machine in all branches of the U.S. armed forces for writing documents during the 1960's-1970's was the IBM Selectric and Selectric II typewriters, both of which contain interchangeable fonts on a typeface ball. So wide-spread was the use of these machines that they were made part of the planned maintenance system in which repairs and upgrades were done by military personnel rather than the factory. The use of stand-alone word processors and office computers did not appear at military commands until as early as the late 1970s, well after the Killian documents were supposedly written.[11]

The header of each document bears the name and address of the squadron: 111th Fighter Interceptor Squadron, P.O. Box 34567, Houston, Texas 77034. Not just the sequential number of the P.O. box was suspect, but the fact that it was even on the memo at all raised questions. Military addresses have always included the full name and location; at no time has any branch of the military, active duty, guard, or reserve, used a post office box as an address.

Gary Killian, son of Lt. Colonel Killian, stated that his father always signed his full name on documents and letters; there was nothing abbreviated, as in the suspect documents. In an unsigned document, obtained by CBS and dated August 18, 1973, was captioned CYA. "If he had written that, he would have signed it," Killian told FOX News of his father. Killian also stated his father would have typed such a document himself, even though he was a "very poor" typist who "hated" it. "He did not type memos to himself," Killian added, stating it was "too much effort" and "very dangerous ... not a good practice."[11]

Those that tendered their resignations on request were: Senior Vice President Betsy West, the supervisor of primetime programs for CBS News; Josh Howard, the executive producer of Wednesday's version of 60 Minutes; Mary Murphy, senior broadcast producer and Howard's deputy. Mary Mapes, the actual producer of the Killian documents story, was terminated, in part for calling a senior official in John Kerry's presidential campaign (Joe Lockhart) and offering to put him in touch with Burkett. The CBS panel called Mapes’ action a “clear conflict of interest that created the appearance of political bias.” [12]

Unbowed and still convinced of the document's authenticity, Rather filed a $70 million lawsuit against CBS and its former corporate parent, Viacom on September 19, 2007, claiming he was made a "scapegoat".[13] A day later, Mapes wrote a column in the Huffington Post, claiming that far-right blogs have "pronounced themselves experts on document analysis, and began attacking the form and font in the memos. They screamed objections that ultimately proved to have no basis in fact...They dominated the discussion by churning out gigabytes of mind-numbing internet dissertations about the typeface in the memos, focusing on the curl at the end of the "a," the dip on the top of the "t," the spacing, the superscript, which typewriters were used in the military in 1972. It was a deceptive approach, and it worked".[14]

In a clear contradiction of her rant, Mapes did in fact have prior knowledge of Bush's guard service in her hands but chose to ignore it. In a press release on January 10, 2005, Accuracy in Media reported that the internal investigation conducted by CBS into the "Rathergate" matter revealed that Mapes had documented information on hand which detailed Bush's attempt to volunteer for duty as a fighter pilot in Vietnam but was denied by his superiors at the time due to his inexperience. Accuracy in Media Editor Cliff Kincaid explained:

"Mapes, who was very close to Rather and enjoyed his confidence, had the evidence exonerating Bush of this malicious charge. The report shows that there were multiple credible sources to prove that Bush did not try to avoid Vietnam by going into the National Guard and that he was in fact willing to go to Vietnam as a pilot. However, CBS News deliberately kept this information from its viewers and conveyed an opposite impression because Rather, Mapes & Company were trying to depict Bush as a coward who, as Commander-in-Chief, was sending American soldiers to their deaths in Iraq." [15]

Efforts have been made to revise the record about what happened with this incident. The movie Truth starring Robert Redford and Cate Blanchett whitewashes and promotes a false narrative.[16] CBS News has refused to run advertisements for the release.[17]