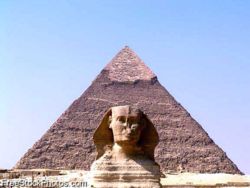 Pharaoh Khaphre's Pyramid of Giza with the Sphinx in the foreground.

A pyramid is a polygon structure in which the base is surmounted by three or more triangular sides which meet at a common apex. These structures have been built for thousands of years, in such diverse areas as Egypt, Mexico, North America, China and India. Pyramids have either smooth sides, like the famous pyramids in Egypt, or stepped sides similar to those built by the Mayans in Mexico.

The ancient Egyptians built their pyramids as burial places for their pharaohs. They were constructed of stone masonry and most commonly have four sides and a square base. The Great Pyramid of Giza is one of the Seven Wonders of the Ancient World, and the only one remaining today.