From Conservapedia
(Redirected from Pharaohs)
Jump to: navigation, search Thutmose III of the 18th Dynasty. This statue depicts him in a way that perfectly displays the official iconographic conventions of Egyptian art and ideology, with the Pharaoh as eternally serene, young and beautiful. The statue is considered a masterpiece of Egyptian sculpture. Greywacke, from Karnak Temple Cachette, now in Luxor Museum.

Pharaoh is the term generally used today to refer to the Kings of Ancient Egypt, including the Hyksos and Ptolemaic rulers, but usually not the Persian rulers, though many of them did have a formal Egyptian royal titulary drawn up.

Etymology of the Word

The term "pharaoh" derives from the Egyptian word pr-'3, reconstructed as "per-'aa" and literally translates as "Great House", i.e. the royal palace. The word itself occurs from the Old Kingdom onward, but only within that context, i.e. smr pr '3 "Courtier of the Great House", rather than referring to the ruler in person.

Towards the end of the 12th Dynasty, the context has shifted somewhat, being used in blessing or as a wish "Great House, may it liver, prosper and be in health", which although still referring to the palace the context appears to be shifting somewhat. It is from the late 18th Dynasty onward in the Amarna Letters that we obtain the first clear usage of the term pr-'3 to refer to the person of the King himself, and from the 19th dynasty onwards it is used in exactly the same manner as "His Majesty" (Hm.f). The term continues to be used into the Greco-Roman era, where it even finds use in temple inscriptions.

The Pharaoh was a divine King (sometimes referred to as a God-King), who ruled as an absolute monarch. He was associated with numerous Egyptian gods, but the most significant relationship was the Pharaoh being the living image or earthly incarnation of Horus. This was an extremely important foundation for Pharaonic ideology, as Horus is closely associated with the ideals of Kingship in theology, being the rightful successor to the murdered Osiris. It is also the oldest of the divine associations, dating back at least as far as the reign of Narmer, at the beginning of the Dynastic period. The Horus name in the royal titulary links directly to this association.

The Pharaoh was also the Son of Ra, as explicitly stated in the royal titulary from the reign of Djedfra (4th Dyn.) onward. This was a very important association in the Old and Middle Kingdom, when Ra was the supreme state god, and remained significant throughout Pharaonic history. When Amun became solarised in the 18th dynasty as Amun-Ra, the Pharaoh came to be seen as the son of this combined form of the sun god as well.

The Pharaoh was also considered to be the son of Geb, Nut, Isis, Osiris, and Hathor. In addition he was also imbued with the traits of others gods at particular times. On the battlefield, Thutmose III was likened to the Theban war god Montu, and Ramesses II to Sekhmet, the avenging Eye of Ra.

The Pharaoh could also be directly worshipped as an independent god in his own right, and it is known that temples to Senusret III, Ahmose I, Amunhotep II, Amunhotep III, and Ramesses II existed. In addition to these, every Pharoh was worshipped after his death in a mortuary cult, the central temple of which was the pyramid complex in the Old and Middle Kingdoms, and the mortuary temple in later periods. These cults were state sponsored, sometimes for centuries following the death of the ruler concerned. Several Pharaohs were also worshipped outside Egypt.

Egyptian philosophy was highly dualistic in nature, seeing two aspects being necessary to form a whole picture. For example, order could not exist without chaos, perhaps best seen in the Contendings of Horus and Set. The role of the Pharaoh was seen in a similar way, and by extension Egypt as a whole. Egypt was the “Two Lands”, which has is generally seen today as Upper and Lower Egypt, reflecting both philosophical view and political history. The title Lord of the Two Lands was an important part of the royal titulary, and is reflected in the idea of the dual crowns of Upper and Lower Egypt (red crown, white crown, and joined crowns), and also the “two ladies” name of the royal titulary. The two ladies were the vulture goddess Nekhbet (patron of Upper Egypt) and cobra goddess Wadjet (patron of Lower Egypt). The latter reared up upon the brow of the Pharaoh to spit and strike at his enemies, and quite commonly the head of Nekhbet was depicted alongside her, as on the mask of Tutankhamun.

The idea of the Two Lands, as well as fitting in the with Egyptian thinking regarding the nature of the universe also preserved the historic memory of the original act of unification of Egypt into one nation circa 3200 – 3100 BC. Although unified, the administration maintained some divisions, including having two national treasuries, though usually under one treasurer. Amenhotep II, with Nemes headdress, false beard, and uraeus (cobra) upon his brow 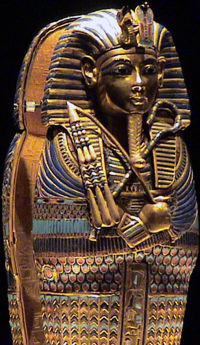 Coffinette of Tutankhamun, with Nemes headdress, false beard,bearing the ceremonial crook and flail. The traditional ureaus aupon the brow is accompanied by the vulture head of Nekhbet

There is a rich variety of Pharaonic regalia, each element with its own symbolism.

Although an absolute monarch, the Pharaoh was obliged to rule in accordance with ma’at, an Egyptian concept generally translated as “just”, but actually a wider ranging concept of “rightness” or “the correct order of things”. As a filial divine son, and as High Priest of Every Temple, the Pharaoh had an obligation to the gods to uphold ma’at on Earth, for it was described as both “what sustains the gods”. Those who did not live up to the obligation were treated harshly by future generations, their name being either blackened, or completely eliminated from monuments and King lists.

Egyptian culture also strongly emphasised continuity and tradition, stressing constantly the need to keep things as they always had been. As such, with a single exception, the Pharaohs of Egypt did not, contrary to Hollywood myth, rule purely on whim, but rather held the country on a pre-existing course, respecting institutions and traditions that were already ancient. As an example, the titulary Late Period officials are often identical to those from the Old Kingdom, having first appeared some 2,500 years before.

The Pharaoh was first and foremost the head of state. Contrary to popular belief, he was not the state itself. Upon the death of a Pharaoh, most administrative staff would remain and serve the successor, thus ensuring the machinery of government could continue to function efficiently. This process was smoothed in the Middle Kingdom with the introduction of co-regencies. Towards the end of one reign, the Pharaoh would make his successor co-regent alongside him, to help ensure a smooth succession. Day-to-day management of government offices was aided by a vizier, and on occasion two viziers, one for Upper, and another for Lower Egypt.

The Pharaoh was also head of all temple cults. Egypt did not, technically, have high priests. The Pharaoh was the High Priest of Every Temple. All offerings were made in his name. High priests were simply his stand-ins. From the New Kingdom onwards, a prominent woman of his family (often a daughter, sometimes a wife) would hold the position of God’s Wife of Amun. There was no conflict between church and state, for the temples were, in effect, government offices.

He was also head of the military forces, both army and navy, and was advised by a military council.

There are any number of “great” Pharaohs, but those generally recognised are:

Biblical writers exclusively use the term "Pharaoh" when referring to the King of Egypt. There are only three instances in the Bible in which a Pharaoh was referred to by name: Shishak, Necoh, and Hophra, possibly corrosponding to Shoshenq I (22nd Dyn, reigned circa 943-922BC), Necho II (26th Dyn, reigned circa 610-595BC) and Haibra, better known by the hellenized name "Apries", (26th Dyn, reigned 589-570BC).

The Egyptians regarded a list of the reigns of all legitimate Pharaohs to be the single most important way of recording history, and numerous “King Lists” remain today, giving valuable information in aiding a reconstruction of Egyptian history. Early archaeologists relied heavily on these king lists, particularly that of Manetho, an Egyptian who wrote at the very beginning of the Ptolemaic era, which prior to the decipherment of hieroglyphs was the only King list known to historians.

With Champollion’s decipherment cam access to addition material, particularly the Abydos king lists, preserved in the Temple of Seti I, and later the Turin Canon.

The problem with the King Lists is that they preserve the history of Egypt in much the same way modern governments do, brush over or simply point black denying aspects of it which did not fit it with official ideology. In Egypt this led to striking of Pharaohs perceived s illegitimate being erased from record. As such it is only with the science of modern archaeology being able to more accurately interpret the archaeological record that we have been able to build a more complete and accurate King List.

Note: This bibliography covers all aspects of the above article except the Biblical References section.