Perelandra is a book by C.S. Lewis and the second in his space trilogy. It was originally published in 1944 and dedicated to "Some Ladies at Wantage." 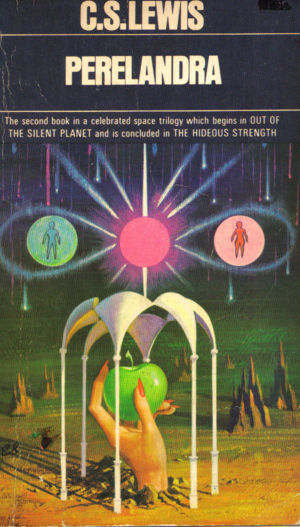 This cover art is here for the purpose of clarifying this review.

The three books in the trilogy, which are only loosely connected, are Out of the Silent Planet, Perelandra, and That Hideous Strength. They take place on Mars, Venus, and Earth respectively. This book for the first two chapters takes place on earth the rest occurs on Venus or Perelandra.[1]

In this book Dr. Elwin Ransom, hero of the last book Out of the Silent Planet, is given un unknown mission to Perelandra or Venus. The first part of the book is taken from the point of view of a fictional Lewis who aids Ransom's departure and return. The rest of the book occurs from the point of view of Ransom on Perelandra. He finds a fresh and young world and the Queen of that world. He also finds his old nemesis, Dr. Edward Weston, who is the devil's agent and part of a plot to let evil into Perelandra. He tries to tempt the Queen into disobeying Maleldil's (the ruler of the heavens) orders. Ransom battles it with little success. He finally battles with the devil and succeeds in stopping the evil from coming to Perelandra. The book ends with his seeing the people of Perelandra ascend to perfection unlike what happened in his own planet, Thulcandra.[2]