Out of the Silent Planet

Out of the Silent Planet is the first book by C. S. Lewis in his famous space trilogy. It is dedicated to his brother, Warren H. Lewis. It was first published in 1938. 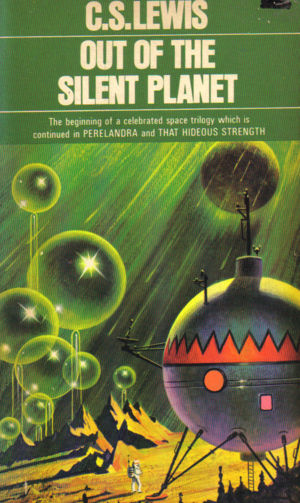 The three books in the trilogy, which are only loosely connected, are Out of the Silent Planet, Perelandra, and That Hideous Strength. They take place on Mars, Venus, and Earth respectively. They are sometimes referred to as the "Ransom trilogy," because a philologist[1] named Elwin Ransom appears in all three. C. S. Lewis' friend J. R. R. Tolkien was a philologist, while to some the word "ransom" evokes the atonement of Christ.

One of the ideas that C. S. Lewis was trying to present in these novels is that the word "space" is wrong, charged with the notion of emptiness, and that it should be thought of as heaven. Earth, which in these books is called Thulcandra, "the silent planet," is under the influence of evil. It has been sealed off from the rest of the universe to prevent it from infecting the rest. In Perelandra, Lewis refers to "the vast astronomic distances which are God's quarantine regulations." Lewis appears to be suggesting that God intends for humans to remain confined to the Earth, and that human attempts to travel between the planets are blasphemous.

In the book a philologist called Dr. Ransom is kidnapped while hiking. His kidnappers, Dr. Weston and Devine, take him aboard a space ship to a planet whose inhabitants call it Malacandra.[2] They intend to hand him over to some mysterious aliens called sorns. He escapes once they land on Malacandra and runs far away until he meets other natives of the planet called hrossa. He lives with them for a while until Weston and Devine kill some of the hrossa. He then leaves to go to the ruler of the planet, Oyarsa, so that the hrossa are out of danger. He meets the other aliens of the planet who turn out to be no more a harm than the hrossa were. He talks to the ruler of the planet, Oyarsa, about his whole journey from his planet to Malacandra. Weston and Devine are captured shortly afterwards and brought before Oyarsa. Oyarsa allows Weston and Devine to leave with Ransom on the space ship but won't let them return to Malacandra again. They return to earth where Ransom then lets a fictional Lewis in on the story. They want to warn people of what Weston and Devine may try to do. They see the only way to do it is through writing a fictional book! [3]