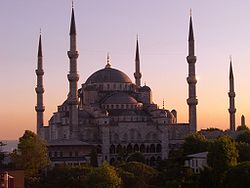 A mosque is a Muslim house of worship, analogous to a Christian church or Jewish synagogue, and will be found in any Muslim community around the world.

Almost all mosques include a minaret from which the muezzin, or "caller", issues calls to worship. All mosques have markers inside them indicating the direction to Mecca, as Muslims pray facing Mecca.