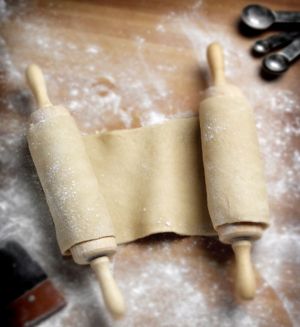 As illustrated by this advertisement for a New York delicatessen, the observance of kosher transforms food into a vehicle for holiness, making the kitchen the spiritual hub of the home. Through observance, every activity associated with food becomes an opportunity for spiritual refinement.[1]

Kosher is the Anglicized form of the Hebrew term kasher, which literally means "good" or "proper," but came to indicate an item "fit for ritual use." Kashrut thus means "fitness" for ritual use.[2] The Hebrew word for non-kosher is trayf, derived from the word terayfa, "torn", stemming from the commandment not to eat meat that has been "torn" by other animals.[3] Any style of food may be kosher or non-kosher, from Chinese to Mexican to Jewish food. Similarly, traditional Ashkenazic Jewish foods like knishes, bagels, blintzes, and matzah ball soup can all be non-kosher if not prepared in accordance with Jewish law.[4]

While Jewish Dietary Laws originated in the Bible (Leviticus 11 and Deuteronomy 17), they have been codified and interpreted over the centuries by rabbinical authorities, and the definitions of kosher have evolved in response to changes in the food industry, the Jewish people, and world culture.[5]

The following is a rough outline of the rules of kashrut.

Jewish people who do not keep kosher often complain that keeping kosher is difficult.[18] Actually, keeping kosher is not particularly difficult in and of itself; what makes it difficult to keep kosher is the fact that the rest of the world does not do so.[18] In fact, the basic underlying rules are fairly simple.[18] If you buy only kosher certified products at the market, the only thing you need to think about is the separation of meat and dairy.[18] Keeping kosher only becomes difficult when you try to eat in a non-kosher restaurant, or at the home of a person who does not keep kosher.[18] In those situations, your lack of knowledge about your host's ingredients and food preparation techniques make it very difficult to keep kosher.[18] Some commentators have pointed out, however, that this may well have been part of what God had in mind: to make it more difficult for us to socialize with those who do not share our religion.[18] Products that have been certified as kosher are labeled with a mark called a hekhsher.[19] Approximately 3/4 of all prepackaged foods have some kind of kosher certification, and most major brands have reliable Orthodox certification.[19] The total number of certified kosher packaged food products in the United States has reached close to 100,000.[20] The most controversial certification is the K, a plain letter K found on products asserted to be kosher.[19] A letter of the alphabet cannot be trademarked, so any manufacturer can put a K on a product, even without any supervision at all.[19] For example, Jell-O brand gelatin puts a K on its product, even though every reliable Orthodox authority agrees that Jell-O is not kosher.[19]

Another misconception about Kosher is that a rabbi is required to bless food, which is false.[21] However, the Jewish organizations that allow a food manufacturer to use their logos, do in fact have Rabbi's that periodically inspect the production facility. The Jewish organizations that lease their logo get paid by the food manufacturer a small fee.

The reason why Kosher exists

According to AskMoses, a traditional Jewish website, "keeping kosher is the means of finding God in your food."[22]

"With Shabbat, we can spiritualize time."[22]

"With the Shul(synagogue), we can spiritualize place."[22]

"With Tefillin, we can spiritualize leather."[22]

"And with kosher, we can spiritualize breakfast/lunch/dinner/snacks."[22]

But according to Judaism, spirituality is all times, and all places. Even when you eat.[22]

$50 billion per year is spent on kosher foods by various different groups.[20]

3. Consumers insisting on a high-quality, safe and healthy product [20]

Kashrut in the New Testament

There is sufficient Scriptual evidence that in the New Testament Kashrut is abolished, or, at least, demoted from being a Divine imperative. This is primarily founded in the saying of Christ, "It is not what goes into a man that defiles but what goes out of a man that defiles him, for from the heart..." This is followed by either the words of the Gospel of Mark or slightly later gloss but representing the original apostolic understanding, "thus making all foods clean."

This understanding underpinned the new reality which the Church would not lose - from now on, the gentiles were grafted into the blessings of Abraham and in the Messiah were now one with the people of God, the Jewish believers in Jesus, and eat at the same table, partaking of the same food, and one with them in the most intimate and commonplace of all their activities - sharing around the dinner table. The common Eucharist, the Holy communion for all races of believers grew out of this understanding, and remained open to all, even, subsequent to New Testament times, after the actual meal portion dropped away. In the letter to the Galatians, Peter was taken to task by Paul for having violated this truth by absenting himself from the table attended by the gentiles.

Acts chapter 15 shows the ability to adapt to new situations and how the spirit of Jesus was applied with kindness, firmness, and understanding in the changing new situation of gentiles coming into the Church. The Old no longer had effect on the ingathering of the gentiles and they were free from the law of Moses. But they were not to eat meat with blood in it, a key element of Kashrut, for doing so was offensive to the Jews amongst them. "for Moses is read everywhere." - For the sake of peace. The unity of the Body of Christ was not to be violated.

Note: It may be that the prohibition against eating the blood came about from an understanding that the Divine intent in the original prohibition of the Old Testament was given as a pointer to the future sacrifice of the Son of God and the shedding of His blood. But this is not explicitly brought out in Acts 15. The rational in the original prohibition in the Old Testament reads, "For the life of the flesh is in the blood, and I have given it to you upon the altar to make atonement for the soul, for it is the blood which makes atonement for the soul." Lev. 17:11 Yet, the symbolic import of this interpretation is not foreign to Biblical interpretation, as the basis for not eating the portion containing the sciatic nerve is found in Scripture itself in the remembrance fostered by this restraint, of Jacob's struggle with the divine being and the subsequent wounding he received on the back of his thigh. One of the symptoms of sciatica is pain in the back portion of the thigh.

Use in popular culture

The term kosher has entered the popular culture to describe anything or anyone which is considered legitimate, honest or pleasing.