"Joseph Makes Himself Known to His Brethren". by Gustave Doré.
(This article refers to Joseph the patriarch and viceroy of Egypt. For other uses of the name, see Joseph (disambiguation).)

Joseph (in Hebrew, יוֹסֵף or Yosef; "God shall add") (2259-vr. 2289-2369 AM, or 1745-vr. 1715-1635 BC) was the eleventh son of Jacob (and the first by his second and favorite wife Rachel). Kidnapped and sold into slavery in Egypt, he interpreted a dream for the then-reigning Pharaoh (most likely Sesostris I[1]), and as a result became viceroy of Egypt, an office he held for eighty years, beginning with his management of a major agricultural crisis.

The Arrogant and Tactless Dreamer

He was born in 2259 AM, in the fourteenth year of the term of service of Jacob to his father-in-law Laban.[2] The Bible says that God granted his birth as a favor to Rachel, who had not been able to have a child before then.[3]

The Bible says nothing further about the life of Joseph until he reaches the age of seventeen. What it says is not quite flattering:

As a result, Joseph's brothers hated him and could not even speak peaceably to him.[4]

Joseph then had two vivid and prophetic dreams which, out of either arrogance or simple tactlessness, he told to his brothers and to his father and mother, causing further resentment. In one, Joseph and his brothers were binding sheaves of grain (probably wheat), and suddenly Joseph's sheaf stood upright and the other sheaves bowed low to it. The brothers quite reasonably interpreted that to mean that Joseph would reign over them.

In another, Joseph dreamed that the sun, the moon, and eleven stars bowed low to him. Even Jacob found that an arrogant thing to say—though he remembered it, perhaps finding it significant and possibly prophetic.[5] 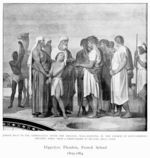 Finally, his brothers had had enough. One fine day they waylaid him and threw him into a dry pit. They would have killed him, but Reuben, the eldest, stopped them from doing that. The brothers ended up selling Joseph to Ishmaelite and Midianite traders, who in turn carried him off to Egypt and sold him to Potiphar (He whom Ra gave), the Pharaoh's captain of the guard. The brothers stained Joseph's coat with blood and gave the coat to his father, saying that "a wild beast" had killed Joseph.[6] This happened in 2276 AM (1728 BC).[7]

Potiphar seems to have realized rapidly what a valuable slave he had bought. Indeed, Potiphar made Joseph his chief steward. But then, disaster struck. Potiphar's wife tried day after day to seduce him. Joseph refused, saying that such a thing would violate Potiphar's trust and is sin against God. One day, Potiphar's wife caught hold of his garment and tore it in an attempt to detain Joseph. When that failed, she cried rape against him, and Potiphar had him thrown into prison.[8]

Gone, by now, were the arrogance and tactlessness that had marked Joseph's earlier life. Furthermore, what Joseph probably did not know was that, even though Joseph remained a slave and was now a State prisoner, God was training him to be an administrator, with ever-larger budgets and levels of authority. Nor did Joseph know in advance the extraordinary turn of events that would cause him to vindicate this training.

The Butler's and Baker's Dreams

One of them was Pharaoh's butler, or possibly cupbearer. He dreamed of seeing a vine having three branches, each bearing ripe grapes. The butler pressed the grapes into a cup and served it at once to Pharaoh. Joseph assured the butler that within three days, Pharaoh would restore the butler to his office. Joseph also asked the butler to speak to Pharaoh about Joseph's case upon his release.

The baker's dream was far more dire: he had three baskets of baked goods balanced on his head, and the birds ate them all. Joseph told him that within three days he would be executed, and birds would eat his flesh afterward.[13]

The third day happened to be the Pharaoh's birthday—and on that day, the butler was reinstaed, and the baker was executed.

The butler did not, however, remember to speak to Pharaoh about Joseph's case. But the butler would not forget Joseph forever—for within two years he would have occasion to remember him again.

In 2289 AM (1716-15 BC),[14] the reigning Pharaoh had two very troubling dreams that were strikingly and chillingly parallel. Each dream involved seven symbols of great plenty being devoured by seven symbols of great hunger and want. When none of Pharaoh's advisers could interpret this dream reliably, Pharaoh's butler remembered Joseph and told Pharaoh the full story.

Pharaoh sent for Joseph at once. Joseph began by modestly disclaiming any ability of his own to interpret dreams, and giving full credit to God. Then he asked Pharaoh to tell him his dreams. When he had done so, Joseph gave his interpretation: that Egypt would see seven years of plenty, to be followed by seven years of a famine severe enough to make people forget that plenteous times had ever been. Joseph then gave Pharaoh a critical piece of advice: Pharaoh must appoint a special minister with full authority over all the land, and have that minister reserve a fifth part of the plenteous harvest to come, so that when the famine came, the people would have food to see them through it.

Pharaoh realized two things at once: that this was a sound plan, and that none in the land of Egypt was better qualified than Joseph to carry out this plan. Therefore, Pharaoh placed Joseph second-in-command only to himself over all of Egypt, and even gave Joseph his signet ring, so that Joseph could make law and issue decrees in Pharaoh's name. Thus Joseph became, by definition, viceroy of Egypt.[15]

As viceroy, Joseph gained a new name: Zaphnathpaaneah, the meaning of which is variously reported as revealer of a secret or preserver of a world (or age). Joseph was thirty years old when he began his viceroyship, and held the office until the day of his death.

Joseph was married at this time to Asenath, daughter of Potipherah Priest of On. By her he had two sons, Manasseh and Ephraim.[16]

During the next seven years, Egypt saw some of the most abundant harvests in that nation's history. Joseph did exactly as he said he would: he reserved one-fifth of the harvest in granaries in every major city. Then the famine struck. This famine affected not only Egypt but also all the surrounding lands—but Joseph now had granaries full of grain to dole out to anyone who asked, Egyptian or foreign.[17]

Two years into the famine, Jacob sent ten of his eleven remaining sons to Egypt to buy grain. Joseph now remembered his original dreams of reigning over his brothers and decided to test them.[18] He at first accused them of being on a spy mission for a warring foreign power—not an entirely unreasonable assumption, except that Joseph knew who his brothers were, even if they did not recognize him. (They knew him by his Egyptian name Zaphnathpaaneah, not by his Hebrew name Joseph.) The brothers told him their history, except that they said that one of their number (Joseph) was dead, which of course was untrue, and that another brother (Benjamin) was staying with their father. Joseph ordered them to bring Benjamin back to him, and held Simeon as a hostage against their return. But Joseph also gave them a full ration of grain to take back to Jacob in Canaan—and also returned the money they had used to buy it, by placing it in their grain sacks for them to find on the return journey.

Eventually the brothers had to return, after the grain ration ran out. This time they brought Benjamin with them. Again Joseph sent them back with a full load of grain, and again Joseph put back their money into their sacks—but this time Joseph hid a silver cup in Benjamin's sack. He then had the brothers arrested, ostentatiously searched them, and "found" the cup in Benjamin's sack. Whereupon Judah, who by now had acceded to the headship of the family in place of Reuben, confessed all to Joseph, including the complete truth of Joseph's disappearance. Judah also offered himself as a hostage in place of Benjamin.

Whatever psychological operation Joseph had been running against his brothers was now at an end, because Joseph could no longer hold back the love he still bore them, and their father. He ordered everyone else out of the room, and then revealed to them his identity and asked whether Jacob was still alive. When the brothers assured him that Jacob still lived, Joseph commandeered many wagons and invited his brothers to bring every member of Jacob's extended family to Egypt. They settled in the land of Goshen, which Pharaoh gladly made available.[19][20]

The famine was so sore in Egypt that very quickly the Egyptian people ran out of money to buy grain. So Joseph allowed them to pay him in cattle, and thus acquired for Pharaoh all of the livestock of Egypt. Eventually even livestock gave out, and so Joseph ended up buying all the land that everyone held—so that from that day forward, the Pharaoh owned all the land directly. (This did not apply to the priestly class, because they always received a portion of whatever grain Pharaoh himself had.) Joseph also set this permanent policy for all farmers in Egypt: that every year, when they had a plentiful harvest, they would give twenty percent to Pharaoh as a store against a repeat of the famine.[21]

Seventeen years after Jacob arrived in Egypt, he died. Before he died, he adopted Joseph's two sons as his own. This entitled Manasseh and Ephraim each to a full share of Jacob's estate and to the rights that attached to it.[22]

Jacob also gave Ephraim a clear preferment over Manasseh, even though Manasseh had been born first. (Genesis 48:7-20 )

Jacob also gave Joseph strict orders not to bury him in Egypt, but to bury him in the burial ground in the Cave of Machpelah that held the tombs of Abraham, Sarah, Isaac, Rebekah, and Jacob's first wife Leah.[23] (Rachel was buried separately, near Bethlehem.)

When Jacob was buried, Joseph's brothers were afraid that Joseph would take the occasion to retaliate against them for their earlier treatment of him. Joseph took pains to reassure them, saying,

Ye thought evil against me; but God meant it unto good, to bring to pass, as it is this day, to save much people alive. Genesis 50:15-21 (KJV)

Joseph lived for one hundred ten years, and reigned as viceroy in Egypt for eighty years. In 2369 AM,[24] Joseph died. Before he died, he gave an order—or perhaps simply uttered a prophecy—that his descendants were to carry his bones out of Egypt when they left.[25]

As mentioned above, the most likely candidate for the Pharaoh who made Joseph viceroy of Egypt is Sesostris I.[1] He is the second ruler of the Twelfth Dynasty,[26][27][28] having succeeded his father Amenemhet I, and receives credit for ushering in an era of prosperity in his country.

James Ussher's calculation of the "years of the world" at which Joseph was born, flourished, and died has its basis in the detailed genealogies mentioned for all of Joseph's direct ancestors, going clear back to Adam through Shem and his father Noah.[29][30]

The calculation of the Julian (that is, the BC) year is problematic, because of disputes concerning:

For a detailed treatment of the disputes and how they affect the calculation of the AM and BC dates, see here.

Joseph appears in multiple motion picture and television dramatizations of his life, his sale into slavery, and his career as viceroy of Egypt. Most of these treatments remain faithful to the story of Joseph, but all of these treatments are flawed in one manner or another: