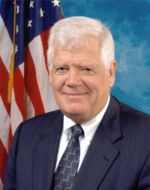 Jim McDermott, born December 28, 1936 (age 84), is a Democratic Member of Congress who represents the Seventh District of Washington State. McDermott currently serves in the 111th Congress. He is also often called "the most liberal member of Congress."[1][2][3]

McDermott has advocated a system of universal health insurance since 1972. In Congress, McDermott has introduced H.R. 1200, the American Health Security Act, every session since the 103rd Congress (1993–94); a measure to create a national, single-payer system of socialized health care coverage. H.R. 3962, the Affordable Health Care for America Act, which passed the House of Representatives on November 7, 2009, represents the ideas of three House committees of jurisdiction, including the Committee on Ways and Means, on which Jim McDermott serves.

McDermott has proven an elusive target in recent years, willing to debate only infrequently.[6] Despite his background, McDermott is widely accepted as Seattle's so-called "congressman for life" and has won 10 consecutive terms in the House. Linnea Noreen, an independent in the 7th Congressional District race for 2006, said, "Nearly every race is a foregone conclusion. That means ineffective leaders like Jim McDermott are unaccountable."[1]

Shortly prior to the Iraq War, McDermott traveled to Baghdad in a trip financially supported by Iraqi-American businessman Shakir al-Khafaji, who has been investigated for receiving "lucrative vouchers for Iraqi oil from Saddam's government."[5][7]

On a Roll Call vote in June 2007 calling on the United Nations Security Council to charge Iranian President Mahmoud Ahmadinejad with violating the 1948 Convention on the Prevention and Punishment of the Crime of Genocide and the United Nations Charter because of his calls for the destruction of the State of Israel, McDermott voted "Present." [8] This indicates a refusal to vote one way or the other.