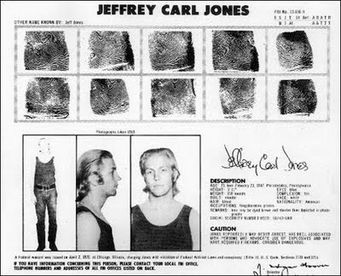 Jeff Jones, co-author of Prairie Fire: The Politics of Revolutionary Anti-imperialism along with Bill Ayers and Bernardine Dohrn, was wanted by the FBI for failure to appear in court to face federal charges of "crossing state lines to foment a riot." Jones currently is the Director of the New York State Apollo Alliance for clean energy and so-called "green-collar jobs." [1] Obama administration Green Czar Van Jones was a founder and board member of Apollo Alliance. [2]

In November 1967 the North Vietnamese Embassy in Phnom Penh, Cambodia requested reservations for Jones, Cathy Wilkerson, and others to fly to Hanoi.

On a June 27, 1969 press interview with Radio Havana, Jones discussed the Students for a Democratic Society (SDS) expulsion of the Progressive Labor Party (PLP) as deviationist from the Maoist line the SDS recently adopted.

Jones was arrested during the Chicago "Days of Rage" in October 1969 and attended the WUO's Flint Michigan War Council in 1970.