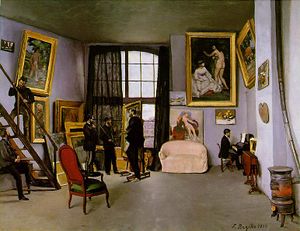 His home in the Batignolles neighborhood in Paris became a headquarters for the Impressionists; hence the movement was first called the "Batignolles School." Bazille's 1870 work The Artist's Studio in the Rue de la Condamine showing Renoir, journalist and critic mile Zola, Monet, Edouard Manet, Bazille, and Edmond Maitre in Bazille's studio exemplifies this period. Ibidem The setting for the painting is Bazille’s studio at 9 rue de la Condamine, which he shared with Renoir from the beginning of 1868 until May 1870. Some of Bazille’s works are scattered around the room. To the left, on the wall, we have his Fisherman with a Net and his painting entitled La Toilette can be seen hanging just above the white sofa. The small still-life above the head of the piano player is a still life by Monet which Bazille had bought in order to support his friend. We see three men standing at an easel discussing the painting on display. The man with the hat standing in the middle is Édouard Manet and behind him we think is Monet. The tall man to the right of the easel, palette in hand, is Bazille himself. On the staircase is the journalist, writer and art critic, Emile Zola, who is in discussion with Renoir, who is seated below the staircase. At the piano is Bazille’s musician friend Edmond Maitre. [2]