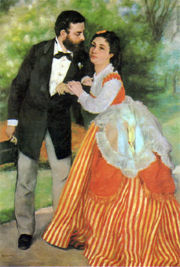 Alfred Sisley (Paris 1839 - Moret-sur-Loing 1899), British painter. While living in Paris, he met Monet, Renoir and Jean-Frédéric Bazille. Sisley was one of the creators of French Impressionism.

Sisley did not live to see his talent recognized, however, a year after his death, his painting "Flood at Port-Marly" (Orsay Museum - Paris) reached a high bidding.

Sisley was exclusively a landscape painter, who, in the line of Camille Corot, and with Claude Monet, best sought and succeeded in expressing the most subtle nuances of nature in Impressionist landscapes.[1] He exhibited with the Impressionist group in 1874, 1876, 1877 and 1882.

In 1868, Alfred Sisley's landscape "Avenue of Chestnut Trees near La Celle Saint-Cloud (Southampton)" was shown at the prestigious Salon art exhibition at Paris.[2] The flood of 1876 at Port-Marly, France, became the subject of a large series of his landscapes He painted 7 canvas on this event.