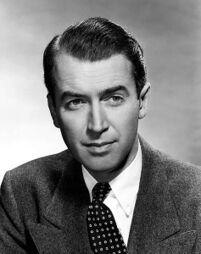 James Stewart (May 20, 1908 – July 2, 1997) was an American actor best known for his work in Frank Capra's You Can't Take It with You, Mr. Smith Goes to Washington and It's a Wonderful Life. He also starred in Alfred Hitchcock's Rear Window and Vertigo. Stewart, a civilian pilot, also served the United States in World War II as a bomber pilot.[1] He considered himself a solid conservative and actively campaigned for both Richard Nixon and his close friend Ronald Reagan in their presidential elections. He was also a Christian.