James Strom Thurmond (December 5, 1902 – June 26, 2003) was a Unites States Senator from South Carolina for over fifty years. He served from 1954 to 1964 as a Democrat and from 1964 to his death in 2003 as a Republican. He holds the record for length of service in the Senate, and he is the only major office holder in American history to serve at age 100. Prior to 2010, Thurmond was the only senator in US history to have been elected by write-in vote; Lisa Murkowski was elected senator of Alaska by write-in during the 2010 midterm election.

Thurmond began his career as a Democrat. As a South Carolina state senator in 1938 he publicly opposed lynching and declared that the Ku Klux Klan stood for "the most abominable type of lawlessness." Thurmond called himself a "progressive."

In the late 1940s, Strom Thurmond—a Democrat—was a moderate and a modernizer who represented the middle class, the wealthy landowners, and the business community in the state to bring in new industry. In South Carolina terms he was a New Deal liberal, but he rejected the populism of the "lint heads" (mill workers and poor farmers) led by Cole Blease and Olin Johnston. Thurmond belonged to the more conservative faction of the Democrat Party led by James Byrnes.[1] As Governor of South Carolina, Thurmond said on a radio broadcast: "We need a progressive outlook, a progressive program and a progressive leadership." In his inaugural address as governor, Thurmond not only called for abolishing the poll tax, but also advocated expanding workman's compensation laws, and better working conditions in plants and factories. He repeated his call for better public education, and told the state that "more attention should be given to Negro education".[2]

Thurmond advocated in his inaugural speech: ..."equal rights for women in every respect...equal pay for equal work for women."

On February 16, 1947, a young black man from Pickens County was arrested and charged with the murder of Thomas Brown, a white Greenville taxicab driver. The next day a mob broke into the Pickens County jail, took Earle, shot him, stabbed him and then beat him to death on the outskirts of town. The FBI and state officials investigated the crime at the behest of Thurmond, who also called for the prosecution of those accused of lynching. 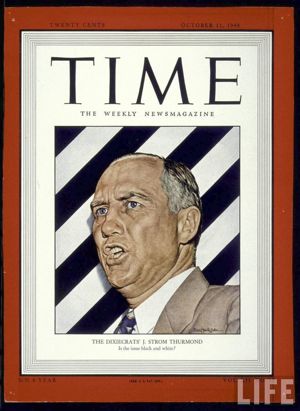 Thurmond as a Democrat had been a supporter of segregation as most were in the South at that time, and ran for President on the breakaway Dixiecrat platform in 1948.

Dixiecrat was the informal term for Southern Democrats who in 1948 refused to support President Harry S. Truman for reelection because he ordered integration of the United States Armed Forces. The official name was the States Rights Party. They formed a third party that nominated Thurmond, who carried four states in the Deep South where he was the official nominee of the splinter party, gaining 39 electoral votes. Thurmond had 1.2 million popular votes, or 2.4% of the national total. The party did not nominate any other candidates at any level, and dissolved after Truman won the election. Dixiecrats like Thurmond went back to their old party.

Like many New Dealers, Thurmond by the 1960s was disenchanted with big government, the War on Poverty, and the Great Society's attack on Black families and traditional values, which led to his defection to the Republicans in 1964. By the 1970s, poverty emerged victorious in this great national struggle, with stagflation, no growth, high unemployment to achieve equality among races, crumbling family structure and rising abortion rates were the hallmarks of the Marxist utopia that Democrats were seeking to build. Many New Deal era Democrats had already left the party.

At Thurmond's one hundredth birthday party, Senate Majority Leader Trent Lott humored Thurmond by saying if he had been elected before Democrat presidents led the United States into the Korean and Vietnam Wars, "we wouldn't have had these problems all these years." Liberals and race baiters were in an uproar, demanding Lott not only apologize, but resign from the Senate. This politically motivated pressure and distortion of the remarks, eventually caused Lott to resign his position as Majority Leader. But no one attacked Thurmond, who remained in the Senate.

After Thurmond's death, it was revealed that he had fathered a child with a woman in his family's employ. The woman he fathered the child with was an African-American domestic worker in the Thurmond family household. She was 16 and Thurmond was 22. [1] Thurmond and the child did not meet until she was 16 years old and she was unaware of the fact he was her father until that time. After that meeting, Thurmond (who had always privately given financial support to the mother and child), did take a more personal interest in her life. His now 71-year-old daughter spoke affectionately of her father, and pointedly told reporters she and her mother had never held a grudge or ill feelings toward Thurmond.

Strom Thurmond was married twice. His first wife, Jean Crouch, died of cancer in 1960. He married his second wife, Nancy Moore, in 1968 and remained married until his death. She worked on his staff prior to their marriage.