The Greco-Persian Wars (500 BC - 448 BC), also known as the Medic Wars, were a series of conflicts fought between the Achaemenid Empire (in modern Iran, led by Xerxes) and the Greek city-states (most notably Athens and Sparta). The war may be best known for the Battle of Thermopylae, which has given birth to many cultural references even to this day. 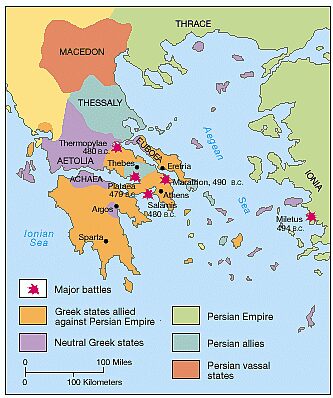 The roots of the Greco-Persian Wars trace to 545 B.C., when the Achaemenid Empire conquered and annexed Ionia. While none of the Greek city-states risked sending military units to defend Ionia, the Spartans did send a message to king Cyrus the Great, warning him to stay away from mainland Greece. Upon hearing this message, Cyrus famously replied "Who are the Spartans?".

Cyrus did not heed the Spartan message. In 514 B.C., the Persians conquered Thrace and Macedonia, angering the Greeks. Ionia had been seen by Cyrus as a logical expansion of the Achaemenid Empire, though Ionia was culturally and traditionally connected to the other Greek-speaking lands around the Aegean Sea.

By now, Darius I had taken control of Persia. In 499 B.C., Ionia begins to rebel against Persian rule. As the Ionians and Persians fought, Athens covertly sent supplies to Ionia. The revolts were put down by 493 B.C., and Cyrus set his sights on Athens. A Persian amphibious force of nearly 600 ships sailed towards Eretria, easily sacking the city. The force then crossed to the mainland at Marathon, a large, flat plain just north of Athens.

At Marathon, one of the largest battles in Classical Antiquity took place. Nearly 11,000 Athenians held their own against some 200,000 Persians. After the victory, a Greek soldier by the name of Pheidippides ran nonstop from Marathon to Athens, to announce the miraculous victory (only 200 Greeks died in the entire battle). This was the inspiration for the marathon race.

For a more detailed treatment, see Battle of Thermopylae.


By 481 B.C., A large Persian force (described as two million by Herodotus, but estimates range from this figure to as low as 200,000, which is still a substantial size) had been assembled to march along the northern coast of the Aegean into Greece. This was accompanied by a large navy, which sailed down the coast alongside the troops. This was disturbing to the Greek city states, who convened at the Isthmus of Corinth to discuss the threat caused by the Persians. A loose alliance of several city-states, led by King Leonidas of Sparta, and including around 5,200 troops was organized, and chose to hold a narrow mountain pass called Thermopylae. Despite great success In the first two days, the Greek alliance was compromised when a small Persian force found a route around the pass. The 300 Spartan and 700 Thespian soldiers volunteered to hold the pass the next day and allow the other city-states (Athens, Mantineia, Tegea, Corinth, Phocia, Floia, Thebes, Arcadia, and Mycenae) to retreat to fight again.

Of the Greek city-states, Athens had the most powerful navy, so the leader of the alliance's navy was the Athenian Themistocles. At the Battle of Artemisium, he had ensured that the Persian ground troops and navy could not link up during the Battle of Thermopylae. After the Greeks lost the pass, Themistocles sailed south to the Strait of Salamis. Here he employed a tactic exactly similar to Leonidas. He aligned his small, fast ships across the strait. The straight, much like the mountain pass, was narrow, and very few of the larger Persian ships could go through at a time. Because of this, several of the faster Greek triremes could outmaneuver and sink the Persian ships a few at a time. Sometimes this was achieved by the trireme spearing the hull with a large ram on the front, others it was by the Greeks sending hoplites into the enemy boat and killing the crew and capturing the ship. The Persian navy was utterly destroyed, leaving the ground troops with no support.

A year later, the Persian army and those who retreated from Thermopylae met at the city-state of Plataea. By this time, Xerxes had returned to Persia, leaving his top general Mardonius in command. The Persians expected a quick victory, but in the past year the Greeks had pulled many more city states into the alliance, and contributed more soldiers. The two opposing armies were nearly equal in size, at over 100,000. The Greeks destroyed the Persian force (some 1,000 Greeks were killed, while only 43,000 Persians survived). Mardonius was killed in the battle, and the surviving Persians retreated northward, only to be massacred by Alexander I of Macedon.