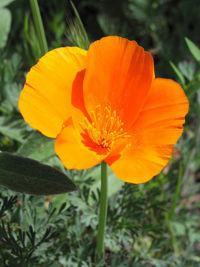 The Golden Poppy is the state flower for California. The flowers are drought-resistant and adaptable to the California climate and grow wild all over the state. The flowers do not grow very tall, commonly less than a foot in height, and have one four-petal flower per stem, about 2 or 3 inches across.[1]

The flowers can take root in sandy, difficult soil where other plants’ seeds may fail. They are pollinated by bees and hummingbirds. The poppy's Botanical name, Eschsholtzia californica, was given to it in 1816 by naturalist Adelbert Von Chamisso.[2] It is also sometimes called copa de oro (cup of gold).[3]

On December 12, 1890, the members of the California State Floral Society voted for a flower that they thought would best serve the State of California as an official emblem. Of the 3 flowers being considered, the Golden poppy won.[4] An act of the Legislature on March 2, 1903[5] resulted in the golden poppy being designated as the official State flower of California. In 1973, the law was amended to designate April 6 of each year as California Poppy Day.