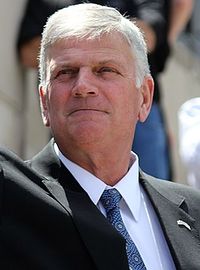 William Franklin Graham, III, known as Franklin Graham (born July 14, 1952), the oldest son of the late Billy and Ruth Bell Graham, is the president and CEO of Samaritan's Purse and the Billy Graham Evangelistic Association. As an evangelist, he has led crusades around the world, spreading the Gospel of Jesus Christ. He conducted a large-scale crusade in June 2018 in California and then headed to two other liberal states, Oregon and Washington State. Franklin has called Christian persecution in India "very troubling". [1]