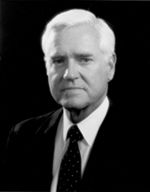 Hollings was born in Charleston, South Carolina. He earned a Bachelor of Arts degree from The Citadel in 1942. Following his graduation, he served as an artillery officer in the U.S. Army during World War II. After the war, Hollings earned a law degree from the University of South Carolina in 1947.

Hollings' political career began when he was elected to the South Carolina House of Representatives in 1948. He later served as the state's lieutenant governor (1954-1958) and governor (1959-1963). Hollings was elected to the United States Senate following the 1965 death of Senator Olin Johnston, where he served until retiring in 2005.

Hollings criticized the Bush Administration over the Iraq war in 2004 when he said:

Interesting enough, this was not the first time Hollings had been accused of anti-Semitism. He had once called Howard Metzenbaum "the Senator from B'Nai B'rith on the floor."[3] Hollings had been criticized by the open-source community due to his strict legislative activity with regard to copyright law (and alleged financial ties to Disney).[4]