Richard Norman Perle (born September 16, 1941 in New York) is a former aide to Democratic Party senator Henry Jackson, former Undersecretary of Defense in the Reagan administration, and later as civilian advisor to The Pentagon as a member of the Defense Policy Board Advisory Committee. He remains registered as a Democrat out of "nostalgia [and] respect for Scoop Jackson"[1] and John F. Kennedy. Outside of the public realm, Richard Perle served on Hollinger International Incorporated's board of directors along with Henry Kissinger. He was nicknamed "the Prince of Darkness" for his hard-line position against the Soviet Union. He is a prominent neoconservative. 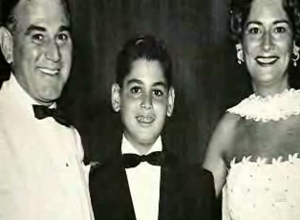 Richard Perle as a teenager with his parents.

Perle has a longstanding interest in the problem of Iraq and Saddam Hussein. In 1998, he co-signed a letter from PNAC to then-President Bill Clinton; it called on the President to "implement[] a strategy for removing Saddam's regime from power" and noted that "[t]his will require a full complement of diplomatic, political and military efforts."[2] The letter also argued that Saddam Hussein's development of WMDs would result in grave risk to Israel, American troops in the region, moderate Arab states, and the world's oil supply.

Shortly after 9/11, Perle pressed for action against Saddam Hussein and Iraq. He maintained that Iraq was involved in terrorism, that there were documentable ties between Saddam Hussein and Osama bin Laden, and that a primary goal of the war on terror should be to topple Saddam. He said that terrorists should be pursued "even if we cannot prove to the standards that we enjoy in our own civil society"—presumably proof beyond a reasonable doubt, as is done in criminal trials--"that they were involved." [3]

Throughout 2001, 2002, and 2003, Perle continued to advocate war with Iraq as Chairman of the Defense Policy Board Advisory Committee. According to one report, he claimed that only 40,000 troops would be required for the invasion, which in his view would involve taking control of the north and south, thus cutting Saddam off from the oil fields. He is also quoted as saying that "[t]he Army guys," who had been calling for far more troops, "don't know anything."[4] Perle later stated that his view on this had been "distorted" and his proposal for 40,000 troops referred to "a different strategy in which we were working with the opposition."[5]

His views on the Iraq war have changed in several ways:

Overall, Perle acknowledges that "mistakes were made," and he is clear about where the buck stops: "At the end of the day," he has said, "you have to hold the president responsible."[8]