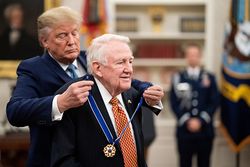 Edwin Meese III (b. Dec. 2, 1931) is a prominent leader, thinker and elder statesman in the conservative movement – and America itself. From January 1981 to February 1985, Meese held the position of Counsel to the President, the senior position on the White House Staff, where he functioned as President Ronald Reagan's chief policy adviser. He served as the seventy-fifth Attorney General of the United States from February 1985 to August 1988.[1]

Like many leaders of the conservative movement, Meese is critical of the concept of the Incorporation doctrine.[2] He is known as a strong proponent of originalism.

U.S. President Donald Trump awarded the Medal of Freedom to Meese on October 8, 2019.[3]

Edwin Meese is an expert on the U.S. legal system, law enforcement and criminal justice, intelligence and national security, and the Reagan Presidency. His current research focuses on the criminal justice system, federalism, emergency response management, and terrorism. He was advisor to Reagan at the time of the shootdown of Korean Airlines Flight 007. He is a distinguished visiting fellow at the Hoover Institution (Stanford University) and is Chairman of the Center for Legal and Judicial Studies and he holds the Ronald Reagan Chair in Public Policy at the Heritage Foundation.

Meese headed Ronald Reagan's transition effort after the former governor won the 1980 presidential election. During the presidential campaign that year, he served as Chief of Staff and senior issues adviser for the Reagan-Bush Committee.[1]

He graduated from Yale University in 1953 and holds a law degree from the University of California-Berkeley. He is a retired Colonel in the Army Reserve.

Meese and his wife, Ursula, live in McLean, Va. and Rancho Santa Fe, California. They have two grown children.