The Detroit Red Wings are a hockey team based in Detroit, Michigan. They play in the Atlantic Division of the Eastern Conference of the National Hockey League (NHL). As hockey is one of the most popular sports in Detroit, it has the nickname "Hockeytown". The Red Wings are one of the original six teams of the NHL, and have won the Stanley Cup 11 times, most recently in 2007-2008. The Red Wings played at the Joe Louis Arena, named after a heavyweight boxer from Detroit from 1979-2017. The Red Wings moved to a newly built Little Caesars Arena in late 2017 where they currently play their games. 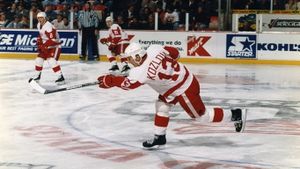 National Hockey League players known as the "Russian Five" from the USSR to play for the Detroit Red Wings. Pictured are 3 of the players in action: Slava Kozlov (Front), Igor Larionov (Left) and Sergei Fedorov (Center) at Joe Louis Arena in Detroit, Michigan.

Luc Robitaille, as a member of the Detroit Red Wings, brings the Stanley Cup championship Trophy to the set of Star Trek: Enterprise with Scott Bakula on the Paramount Pictures lot in Los Angeles, California in 2002