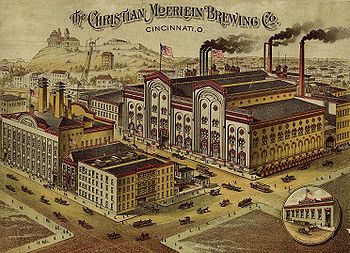 The last great railroad station constructed in the United States, the Cincinnati Union Terminal, officially opened in 1933. The $41 million Art Deco masterpiece was sold to the city in 1975, a victim of postwar America's love affair with the automobile. In 2003, the Union Terminal, home to the Cincinnati Museum Center and serving Amtrak's passenger train the Cardinal, celebrated its 70th year.

The interplay between civic virtue, republicanism and self-interest in Cincinnati has been explored by the city’s leading historians, such as Daniel Aaron, Zane L. Miller, Carl Abbott, and Alan I. Marcus. All conclude that more than economic success was needed to make a city like Cincinnati great and prosperous. It also required culture, civic associations, and cooperation; these, as much as individualism, help explain Cincinnati's commercial dynamism during much of its history. Urban Americans who dispense with civic virtue do so at their own peril.[2]

Settled as part of John Cleve Symmes's Miami land purchase, Cincinnati grew rapidly into a commercial, political, and military center. Although it suffered the vagaries of arbitrary civil and military rule, by 1810, it was an amalgam of 15,000 citizens of various ethnicities.

In 1832 the newly formed Lane Seminary in Cincinnati welcomed the prestigious Reverend Lyman Beecher as its president. Trouble began almost immediately in 1833 when Theodore Dwight Weld became a student and attempted to make antislavery the principal work of the seminary, leading to the expulsion of Weld and other antislavery activists.

In 1828 wealthy Englishwoman Frances Trollope arrived with a plan to become rich by opening a department store. She opened Trollope's Bazaar, a grandiose structure featuring fancy goods, a coffee house, and a ballroom. Although the bazaar was a spectacular failure, her book, critical of the habits of the citizens of the natives, Domestic Manners of the Americans (1832), published after she returned to London, made her famous throughout America and remains a delightful read.[3]

The high death rate in Cincinnati's two major cholera epidemics, 1832 and 1849, was in part due to the complacency of city officials, lack of leadership in the medical community, and the self-centeredness and distrust among ethnic groups.

Germans immigrated in large numbers starting in the 1840s, centering in the "Over the Rhine" district. It became the center of music, gymnastics and beer.

The work of Cincinnati's African American painter Robert S. Duncanson expresses the social, political, and economic position of Cincinnati blacks in the 1850s through a union of bucolic and urban themes. As the city emerged as an important regional economic power, its political, cultural, and business leaders also promoted a civic culture of devotion to the common good. In his paintings, which include landscapes, portraits, and illustrations, Duncanson drew together contemporary discourses of the civilizing power of nature, romantic racialism, civic boosterism, and civic virtue to include African Americans in the city's common vision of its citizenry. Such assertions of African American citizenship challenged such manifestations of racism as the city's 1841 race riot sparked by white fears of fugitive slaves entering Ohio.[4]

When a group of upper-class women founded the Cincinnati Orphan Asylum (COA) in 1833, they not only provided care for children of impoverished women, but as these women combed the city searching for wet nurses for abandoned children, they also broke down social barriers between women of different social backgrounds. When Cincinnati created a poor farm in 1853, the COA lost the money that the township had provided for its activities.

Central to the emergence of Cincinnati as the leading commercial and manufacturing center of the West by 1850 was the growth of its meat-packing industry, marked by changing technology in the by-products industry, consolidation of various aspects of production, and mass production.

Economically, the Civil War benefited Cincinnati. Railroads that before the war were on the verge of bankruptcy prospered. The Queen City's location enabled merchants to gain military contracts. In almost every line of business the Queen City enlarged its trade.[5]

In 1888, the German Protestant community created an institution for deaconesses and sick care (Krankenhaus) that evolved into the city's first general hospital. Successful establishment of women's religious and nursing training and completion of a modern structure facilitated the trustees' designation of the Deaconess Hospital in 1917.

An eye watering issue in the Progressive Era was the menace of smoke pollution. Middle-class women supporting the Smoke Abatement League led the campaign for smoke abatement; city inspectors issued citations to locomotive firemen. The railroad management blamed the firemen, who in turn complained of poor quality coal and inferior abatement controls. No one wanted dirty air and the middle class was vocal about it. The railroad did not want bad publicity, and workers wanted to keep their jobs. The issue went on for years until the 1940s, when electric engines replaced steam locomotives, but ultimately it was the middle-class view of urban space, where city and home were the same, that prevailed over working-class definitions of city as workplace.[6]

In 1897, Sisters of Charity Justina Segale and Blandina Segale founded the Santa Maria Institute, which responded to urban poverty, particularly the needs of the immigrant poor, by offering religious and vocational education, a residence for girls and young women, and a day nursery. In this way the institute resembled settlement houses established by non-Catholic women such as Jane Addams at Chicago’s Hull House. In the late 19th century, religious vocations offered greater opportunities for leadership and accomplishment than were afforded most Catholic laywomen; thus, within the Sisters of Charity of Cincinnati, Justina and Blandina were able to invent a role for themselves in social work. Their cooperation with secular social service authorities was particularly innovative, leading to even greater effectiveness and contributing to the development of social work as a profession. By the 1920s, however, the cost of innovation was autonomy, as the bureaucratic synthesis of Protestant and Catholic charities in Cincinnati led to a narrowing of the Santa Maria Institute's mission.[7]

In 1922 Powel Crosley, Jr., founded 500,000-watt Cincinnati radio station WLW, which quickly became known as "The Nation's Station" until its closure in 1943.

In 1869, the Cincinnati Red Stockings became the first professional baseball team in the United States, winning all 69 of its games against various amateur and semiprofessional teams across the country. The club, however, disbanded after the 1870 season. A new Red Stockings team played in the National League's first year of existence in 1876. The team finished in last place with a record of nine wins and 56 losses. The team's rocky relationship with the National League led to its expulsion in 1880, followed by its joining a new league, the American Association, in 1881.

The city has built several baseball parks since the 1860s, including the Palace of the Fans, opened in 1902 as one of the first ballparks made of iron and cement; Crosley Field, where the Reds played from 1934 to 1970; and Riverfront Stadium, which opened in 1970.