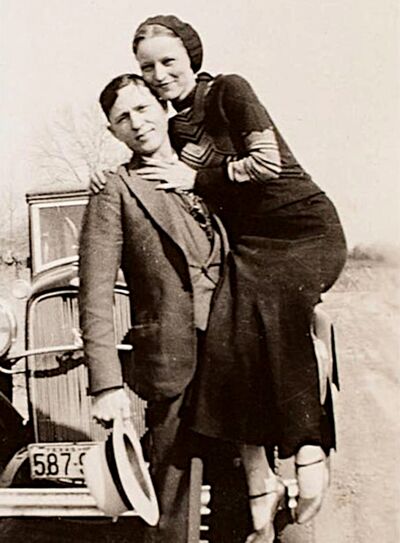 Bonnie and Clyde was a Texas-born team of outlaws who robbed banks and killed those who confronted them during a crime spree during the early part of the Great Depression. Bonnie Elizabeth Parker (born October 1, 1910, in Rowena near Abilene) and Clyde Chestnut (or Champion) Barrow (born March 24, 1909 in Ellis County near Dallas) crisscrossed the interior United States with the gang. Their exploits attracted the attention of the American people, some of whom viewed them, like Robin Hood or Jesse James, as "folk heroes" or "anti-capitalists". The two were on the "Public Enemy" listing from 1931 until they were gunned down on May 23, 1934, near rural Sailes in Bienville Parish, Louisiana, by four pursuing Texas law enforcement officers and Bienville Parish Sheriff Henderson Jordan and his chief deputy and successor as sheriff, Prentiss Oakley.

Besides the approximately dozen bank robberies, the gang struck small stores and rural fueling stations. The gang may have killed as many as nine police officers and four civilians.

Bonnie and Clyde were not a married couple; though they wished to be buried together, they are interred in separate cemeteries in Dallas (Bonnie originally at Fishtrap Cemetery but later reinterred to Crown Hill Cemetery; Clyde at Western Heights Cemetery adjacent to his brother Marvin and sharing a single tombstone with the epitaph "Gone but not forgotten"). At the time of her death, Bonnie was the estranged wife of Roy Glenn Thornton (1908-1937), who died before the age of thirty in a prison break attempt in Houston County near Crockett, Texas.[1]

The couple had insurance policies which, due to then existing laws, were paid out at the time of their deaths. Since then, laws were changed allowing insurance companies to not pay out a policy if the insured dies as the result of a criminal act.

The outlaws' story is unveiled in the 1967 film, Bonnie and Clyde, with Faye Dunaway as Bonnie and Warren Beatty as Clyde. An earlier 1958 film version which received less attention starred Dorothy Michelle Provine (1935-2010) in The Bonnie Parker Story. The "Bonnie and Clyde Trade Days Festival" is still held the third week of May in Gibland in Bienville Parish.

Actress Laura Osnes, an outspoken Christian, successfully played Bonnie in the Broadway musical Bonnie and Clyde,[2] which ran for 36 shows in Manhattan in December 2011 to poor reviews and weak sales.[3]