Robin Hood and the Lady, by Walter Crane

Robin Hood was a medieval English folk hero who supposedly lived at some time between 1100-1450 within the counties of Yorkshire and Nottinghamshire, leading a band of outlaws against the Sheriff of Nottingham. His story has been told in ballads, stories and most recently in film for more than 600 years.

Historians are divided in their opinion as to whether he actually existed or not, or if so, in which century, though he is first mentioned in the thirteenth century.[1] It is likely that the legends are based on the actions of more than one medieval outlaw which would explain why it is difficult to assign Robin to one specific era. Dates given range from the time of King John in the twelfth century to that of King Edward II in the fourteenth.

Early stories of Robin Hood have him in opposition exclusively to figures emblematic of government: The King, who is addicted to taxation; the Sheriff of Nottingham, who is a government employee; or in some instances bishops, such as the Bishop of Hereford. Robin Hood was transformed during the French Revolution into a figure contrary to the original stories, who instead robbed from the rich and gave to the poor.

According to the extant stories Robin Hood was a defrocked knight or other high-ranking person within Nottingham (the first stories state he is a simple highwayman), and wrongfully had his title removed. Operating from within Sherwood Forest, Robin and his band of "Merry Men" - including Little John, Will Scarlet, and Friar Tuck - routinely robbed the traveling rich and gave the stolen money to the poor and destitute. Later stories included his battles with the Sheriff and a powerful knight called Guy of Gisbourne, and are most famously set during the time of Richard I the Lionheart.

Very little evidence exists to support a real Robin Hood; in fact he may have been a composite. The earliest tale is a ballad written in the 1320s known as A Gest of Robyn Hode [1], describing an individual who was pardoned by Edward II, and serving in that monarch's court for a number of months before returning to his outlaw ways. In 1852 one Joseph Hunter, a clergyman and keeper of records in Britain, discovered the possibility that the Gest matched several of the records for Edward, including a servant named "Robyn Hode" who was a porter for the king between March 24 and November 22, 1324; he further went on to claim that his Robyn and a fugitive named Robert Hood of Wakefield - involved in a rebellion against the king under Thomas of Lancaster in 1322 - were the same man. Hunter subsequently offered his conclusions for an historical Robin based on that evidence.

There are records of a Robert Fitzhooth, the Earl of Huntington [2], who was the subject of two plays as Robin by Anthony Munday in 1599. The real Earl of Huntington, a man named David, was brother to King William the Lion of Scotland, and chronicled in Earl David of Huntingdon 1152-1219 A Study in Anglo-Scottish History by K.J. Stringer, with some very Robin Hood-like elements, including a rebellion against King John I.

Rivalry between the two counties in which Robin had operated is strong, with most modern representations of the legends placing him in Nottinghamshire, but most of the scarce historical evidence supporting Yorkshire's claim. In fact, Sherwood (Shire Wood) Forest, Robin's base of operations at the time, stretched unbroken over much of both counties, and the Sheriff of Nottingham who features prominently in the tales, would also have had authority over the Forest of Barnsdale in South Yorkshire. One legend maintains he is buried at Kirklees, now a highly populated Metropolitan District, having selected his burial place by the shooting of an arrow. 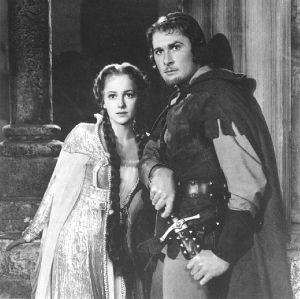 The extent and popularity of the stories have idealized Robin Hood somewhat, transforming him from a common outlaw into a noble who fought a just rebellion against a corrupt king. Chief among them were the many films made about the story, with the most famous being The Adventures of Robin Hood (1938) starring Errol Flynn in the title role. Numerous other film and television adaptations of his life have also been made, including a musical and a Disney animated version with a cast of animals.

The original stories of Robin Hood have him offset against classic characters such as King John, the Sheriff of Nottingham, and at at times even the Bishop of Hereford who was introduced toward the late 1600s. These characters are all directly representative of government agency, including the Bishop, considering the Church of England's historical relationship as an extension of the Monarchy. In short, Robin Hood stole from the government and gave to the poor. This changed around the late 1700s by a man named Joseph Ritson,[2][3][4] who was sympathetic to the Jacobin cause.[5][6] Joseph Ritson is responsible for revising Robin Hood into a redistributionist who "robs from the rich and gives to the poor".

When Ritson first introduced the "new" Robin Hood, the revised character was not popular with all.[7]

A new film released in 2010 by Ridley Scott and starring Russel Crowe as the outlaw details an "origins" story, with Robin standing up for individualism and freedom, as he sides with the supporters of the Magna Carta against King John's tyranny. [3]