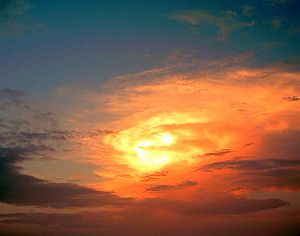 The different colors are due to the dispersion of light produced by the atmosphere.

The atmosphere is the mass of air surrounding a planet.[1]

The earth's atmosphere insulates the earth's surface, making it around 33 degrees Celsius (59 degrees Fahrenheit) warmer than it would be without any air.[2] This occurs through absorption of outgoing infrared rays by gas molecules like water vapor, carbon dioxide, and methane. This warming is known as the greenhouse effect.

"The sun is the major source of energy that drives the earth's atmospheric system so [to] downplay its effect is foolish." [1]

Structure of the atmosphere

The atmosphere consists of several layers:

The term atmosphere is also a unit of pressure. One atmosphere (atm) is defined as 101,325 Pa, which is equal to approximately 14.7 pounds per square inch. This number was determined by finding the average pressure exerted on the earth by a column of air at sea level.