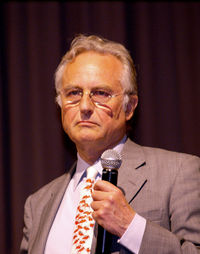 The Richard Dawkins Foundation for Reason and Science had a scandal related to an embezzlement allegation. See: Atheist organizations and scandals

In a 2018 YouTube video entitled David Silverman Ousted as President of American Atheists, the atheist YouTube channel Utah Outcasts said in a video about David Silverman and atheist organizations: "Many other people were also like maybe he was embezzling funds because we know people in atheist activist communities where that kind of sh*t happens. Yes, it was kind of common."[2]

Two atheist nonprofit scandals which recently received some publicity were the organizations Richard Dawkins Foundation for Reason and Science and the We Are Atheism organization.[3]

Nontheist Jex Blackmore on The Satanic Temple and financial transparency The Satanic Temple was co-founded by Lucien Greaves.

The Satanic Temple (TST) is a nontheistic religious and political activist group which is based in Salem, Massachusetts.[4]

The nontheist Jex Blackmore, who had been a national spokesperson for TST wrote about The Satanic Temple and financial transparency:

Atheist organizations, donors, lack of critical thinking and lack of due diligence

People who think about donating priorities and perform due diligence are less likely to donate to organizations who engage in financial mismanagement and scandalous behavior.