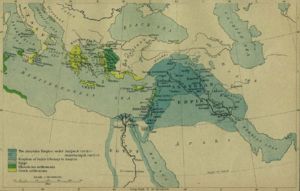 Extent of the Assyrian Empire

Assyria was a very ancient kingdom in northern Mesopotamia. Today that would be in northern Iraq.

It was dependent on Babylonia for a while, but rose to become an independent state in the 14th century B.C. Beginning with the 12th century it declined, only to reemerge as a kingdom again in the 8th century B.C. Under a sequence of powerful Assyrian kings of Tiglath-pileser III, Shalmaneser V, Sargon II, Sennacherib, Esarhaddon and Asurbanipal Assyria expanded by force and controlled most of the Middle East from Egypt to the Persian Gulf.

The Assyrians were known for their cruelty and military skills, and more than a few references in the Bible lament their treatment of the Hebrews. The Old Testament mentions “Assyria” 119 times, including this typical verse: “The Lord was with him; wherever he went, he prospered. He rebelled against the king of Assyria and would not serve him.” (II Kings 18:7 (NRSV))

The Assyrians conquered Samaria, the northern kingdom of Israel, in 722 B.C., but Judah remained free. In 733-732 Tiglath-pileser III exiled the northern and eastern tribes (Naphtali, Dan, Gad, Reuben, the half-tribe of Manasseh).

The Assyrian Empire declined quickly when a simultaneous revolt of Babylon and Media occurred in 625 B.C. A people who ruled through terror, they had no loyal allies when it looked like they could be overthrown. Nineveh, the capital of Assyria, was taken in 612 B.C. and razed to the ground. Fighting continued through 609 B.C. and for a few years the Assyrian general Ashur-uballit tried to save a remnant of the Empire with Harran as its capital, but that last gasp was destroyed in 605 B.C. The Babylonians quickly assumed prominence in the Middle East as the next great Empire as they began their own military campaigns.

Assyrian chronology is anchored to the solar eclipse mentioned in the eponym of Bar-Sagale, determined by archaoastronomy to be June 15/16, 763 BC.[1]