Arlen Specter (February 12, 1930 – October 14, 2012) was the former Democrat senior United States senator from Pennsylvania. He was first elected in 1980, and was subsequently reelected five times since then. He had moderate to liberal viewpoints - particularly when it came to economic and social issues. He supported Obama's massive stimulus bill in 2009 and opposed attempts to overturn Roe v. Wade.

Before defecting to the Democratic Party (see below), Senator Specter was a RINO, disagreeing with the Bush Administration on numerous issues. He was one of three Republicans who supported Obama's stimulus bill in 2009. Threatened with a conservative primary challenger for his seat in 2010, on April 28, 2009, he announced he was switching to the Democratic party. Once Al Franken was declared the victor in the Minnesota Senate race, Specter's vote provided the crucial 60th vote needed for the Democrats (and the two independents) to stop GOP filibusters. However, that filibuster-proof majority ended when Republican Scott Brown won the Massachusetts special Senate election in January 2010.

Specter was defeated in the Democratic primary by Joe Sestak for his reelection in the 2010 Midterm Elections. Sestak would go on to be defeated by Republican nominee Pat Toomey in the general election.

He was a U.S. Air Force veteran, serving within the U.S. as an officer within the Air Force Office of Special Investigations during the Korean War.

Specter's first foray into politics was his election as Philadelphia's District Attorney in 1965. He mounted an unsuccessful campaign for mayor of Philadelphia in 1967 and was defeated for reelection to a third term as District Attorney in 1973. He was defeated in the 1976 Republican Primary for U.S. Senate by John Heinz and in the 1978 primary for Governor of Pennsylvania by Dick Thornburgh. Arlen Specter was elected to the Senate in 1980 and is currently serving his fifth term. In 2005, Senator Specter became Pennsylvania's longest-serving U.S. Senator. He was formerly Chairman of the Senate Judiciary Committee, and was a senior member of the Appropriations and Veterans Affairs committees. However, after defecting from the Republican Party and joining the Democrat caucus, Specter lost all of his seniority. Specter went from serving as the most powerful Republican on the Judiciary Committee to the lowest-ranking Democrat in four out of his five committee assignments.[1]

Arlen Specter made an unsuccessful run for the presidency in 1996 and ended up supporting Republican nominee Robert Dole. Specter has a knack for notoriety; in one such case he was a member of the Warren Commission investigating the death of President John F. Kennedy when he was credited with creating the "magic bullet" theory, which in essence was a single bullet that wounded Kennedy and Texas governor John Connoly, but not before it went through a pair of right-angle turns in mid-air before hitting Connoly.

But his most notorious case - and one which he rarely talks about - is his getting the release on bail of Ira Einhorn, a celebrated Philadelphia liberal and leftist who had strong ties to the elite in the city, and who was scheduled to go to trial for the murder of his former girlfriend, Holly Maddux, who was two-years dead when her mummified body was found stuffed in a trunk in Einhorn's closet in 1979. Specter - who also shared the same elite ties with Einhorn, convinced the judge to have his bail reduced from an "excessive" $100,000 to $40,000, with Einhorn putting up a mere 10% to be released. Judge William Marutani had initially thought that Einhorn might flee to Norway; "I have to disagree with your last statement," replied Specter. "Anybody is as likely to go to Norway as anybody else." Einhorn did flee the country before his trial started in 1981, to Sweden. He remained a fugitive until 1997, when he was extradited from France, convicted in a new trial, and sentenced to life in prison. [1][2]

Specter's moderate to liberal views have affected his political career as a Republican. Many considered him a RINO (Republican in Name Only) while he was in that party. For example, his status as the Chairman of the Senate Judiciary Committee (a position he held from January, 2005 through January, 2007) was in question when he made comments hinting that he would oppose candidates who would overturn Roe v. Wade. In addition, in the 2004 Republican Senate Primary Election, he only received 51% of the vote when the conservative Patrick Toomey challenged him.

Arlen Specter was the only Republican in the Senate to vote for the Employee Free Choice Act,[2] legislation supported by big labor that would eliminate a private-ballot vote over whether workers would unionize. Specter was also one of only three Republicans in the United State Congress to vote for the 2009 economic stimulus bill. Additionally, Specter has announced he supports Single Payer Healthcare.[3]

In the past, there were issues where Specter was considered marginally conservative. In 2002, he voted to authorize the use of military force in Iraq, although many Democrats did so as well. A native of Kansas, Specter supports Second Amendment rights, receiving an A rating from the National Rifle Association, and capital punishment. Specter also supported the confirmation of conservative Clarence Thomas when he was appointed by President Bush to the US Supreme Court in 1991 and aroused considerable controversy through his questioning of Anita Hill, a witness who accused Thomas of sexual harassment. Specter generally supported Republican nominees although he cast a crucial vote against conservative Robert Bork, who was nominated by President Reagan to the Supreme Court.

On February 16, 2005, Specter announced that he had been diagnosed with an advanced form of Hodgkin's disease, a type of cancer. Despite the advanced form, Specter continued working during chemotherapy. He ended treatment on July 22. Senator John Sununu shaved his head to show solidarity with Specter when he was undergoing chemotherapy and was temporarily bald. On October 14, 2012, he passed away. 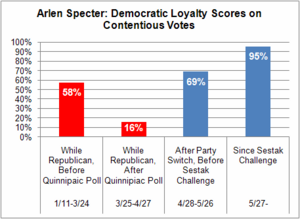 Studies show Arlen Specter's 2010 reelection campaign has influenced his voting record.
Specter barely won the 2004 Republican primary, which allows only registered Republicans to vote, by less than 2% against conservative challenger Pat Toomey. Rick Santorum, himself a former Pennsylvania senator, described that "Specter's biggest problem ... may be that thousands of southeastern Pennsylvania Republicans who voted for him in 2004 can't vote for him in the (2010) primary. Why? Because they're no longer Republicans." In fact, the number of registered Republicans in Pennsylvania decreased by 162,000 between 2004 and 2008.[5] This is one of the main reasons why Specter switched parties; to get re-elected in 2010, he needed to rely on his left-leaning supporters. However, Specter was denied the 2010 Democratic senatorial nomination, and the more conservative Republican Pat Toomey, who lost the Republican primary to Specter six years earlier, narrowly won the general election for the seat in a strongly Republican year in Pennsylvania.